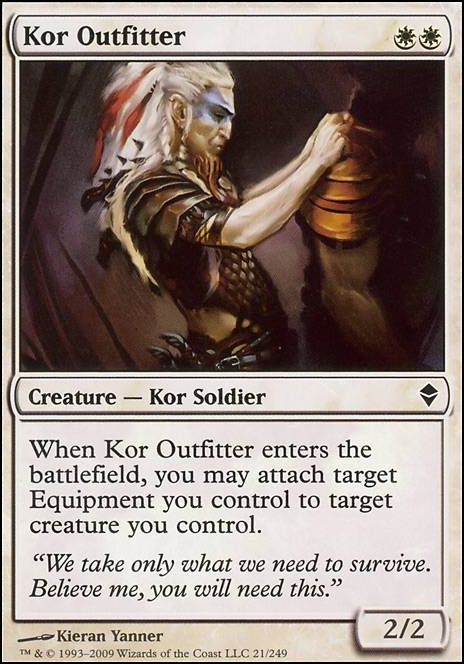 When Kor Outfitter enters the battlefield, you may attach target Equipment you control to target creature you control.

King Grey, the Exalted
by Ize19

If You Had Life Eternal: Evra EDH
by NicS18

I originally went on searching for Colossus Hammer decks because I've always wanted to find a home for Sigarda's Aid, and this card seems like a match made in heaven. Quite literally - Sigarda is an angel, and she even hands a hammer to a creature in the artwork. Although _not quite _as big, haha.

Kazuul's Toll Collector is somewhat janky, but a decent fit here. As is Swiftblade Vindicator, given that he manages to grab hold of the hammer.

Have you considered Kor Outfitter? Unless I'm missing something, Sigarda's Aid is your only way of getting around the equip cost for creatures other than the Toll Collector.

There are still some that either are just lists of cards with the same effect or "combos" that need split into their respective interactions, as with my examples above. I even found someone who used the combo syntax on Plains + Wild Growth.

I have also recently come across a series of "combos" where someone just linked cards with a triggered ability and Strionic Resonator and another where someone linked a bunch of creatures with ETBs and Conjurer's Closet. Both of those are interactions, but it is the obvious use for those cards and doesn't rise to the level of "synergy". Allowing such "combos" to show on a page would make popular enablers page's unusable because of how crowded they would be with combos.

Strionic Resonator + Brago, King Eternal is a synergistic interaction. If I were making the combo link I would add Sol Ring or Mana Vault, but that raises it to an infinite combo.

Strionic Resonator + Kor Outfitter (one I honestly reviewed today) is simply how Resonator is made to be used and does not provide any useful information to people wondering how to get stronger than intended interactions out of the card.

Maybe I am being a little too "Spikey", but I think that the combo database should only include things that at a minimum provide an interaction that is stronger than the base interaction that a given card has with every applicable card..

multimedia I agree that Gideon Blackblade

is better than the one I have at the moment so I went ahead and swamped them. As Akroma's Memorial , I honestly have it in there because I already have a copy but I'll just have to find a new home for it. I also took out Mass Calcify , Deploy to the Front (to help with the cmc), and Spear of Heliod . I want to keep Helm of the Host if I can to satisfy my Johnny tendencies xD. So I added a little equipment with Stoneforge Mystic , Sigarda's Aid , Kor Outfitter , and Hammer of Nazahn . I'm also thinking of adding Puresteel Paladin but I'm not sure if I have enough artifacts to justify it. Maybe swap Spear back in for Honor of the Pure

Oh, right, I was going to finish all the cards...

Fossil Cycle: One problem I see with these, is that without something like Trample, or other form of Evasion, these could be overpowered in a set with ability-less creatures.

Goblin Grabber: I like the Magnetic Theft ETB effect, but there's no reason it should die when unequipped. I would not complain if it was a red Kor Outfitter.

Grand Sabertooth: This card would define a new level of power creep: 1-mana for a 2/2. The problem I see is that no player would ever choose to have a Tundra Wolves when they could have Isamaru, Hound of Konda (even better because it's not legendary).

Gravewarden: When I think of Muraganda, I'm imagining a primitive world, with cavemen, and wild animals. I don't imagine there are any societies on Muraganda organized enough to have a religion and a Cleric, and grave and death rituals. I suppose this same thing could be said about some of the other Shamans and Wizards in the set, that without being a part of Daelin's tribe, they're a little out of place. Could this card be salvaged with a different name and creature type?

Grip of Tar: In a set dependent on creatures without abilities, a 1/1 with Deathtouch is effectively a removal spell. This card is a 2-for-1. Not unlike Consuming Vapors, it should only hit creatures, though.

Heavy Cumulus: Should read like Vines of Vastwood so the creature doesn't get an ability.

Holistic Wisdom: It's like Bred for the Hunt or Secret Plans, but much worse.

March of Mediocrity: Seems to occupy the same design space as Muraganda Petroglyphs.

Mind Devourer: Is his ability "instead" of doing damage? Or "in addition" to doing damage? If it's "in addition" the ability is useless, as he'll kill an opponent through damage long before he mills them out. If it's "instead", then it's just really bad. But, the even bigger problem, is that I'm not sure this is the set this creature belongs in, as Muraganda seems like a primitive world that wouldn't support a magical ecosystem where thoughts are abundant food. Most of this world's inhabitants are feral creatures and cavemen; not nearly the food supply for such a creature.

Mindleech Conch: I could nitpick this one, but honestly, I'd want to see how it played. It would kill an opponent by damage before its milling was relevant, but its "draw 2" when it hits is insane. And 3 power is pretty good, it stands up to most removal in the set, except the 1/1 deathtouchers.

Sidenote: On the subject of 1/1 Defender Deathtouch Ooze tokens, I feel like this set needs more of these as "removal" (Flash Foliage comes to mind as a template). These tokens would make combat quite relevant, and give the opponent a ~real~ incentive to choose an ability instead of the vanilla creature. It occurs to me, that a focus on removal of this type could make Tundra Wolves better than Isamaru, Hound of Konda, and I absolutely love that idea. As flavor, Muraganda seems primitive, so, the 1/1 Defender Deathtouch Oozes, traps and fights seem like the kind of removal that would be abundant on this world.

Nesting Grounds: Awesome card. I was hoping to see another 4 cards like this on theme. Some sort of "Daelin's Cave" in Grixis colors, or something else. If there can't be a cycle, (like Crypt of the Eternals) there needs to be a story to explain why not.

Orb of the Masses: I think this would be one of the few times giving creatures abilities would be good. "Legendary" prevents (experienced) players from using it, then playing another and using the new one. In my mind, the first ability would say "whenever a creature with an ability enters the battlefield", and it should have an imposing presence like the monolith from 2001: A Space Odyssey; the stone that begins the next phase of evolution. It could be like a small choose-your-own-Akroma's Memorial.

Planar Lens: This is not the kind of equipment I'd expect to see on Muraganda. It seems too intellectual.

Primal Instincts: Nice art. Costing 4 is out of the question for something that can't kill opponent's attackers or replace itself. I'll point to Righteousness and Hold the Line, and To Arms!.

Primal Return: ironically Primal creatures don't count as creatures with no abilities while they're in the graveyard.

Primordial Pools: could probably be better with an ability more like Ooze Garden, since Deathtouch is basically removal in this set.

Pulop, the Planar Sentience: The artwork and name conjured up a totally different idea of what this card should do. The art depicts a slime devouring a man, and the name implies the slime duplicating the man. Let me just spitball this idea at you: +1: Create a creature token that's a copy of a creature ~ exiled. // -X: Search your library for a creature with converted mana cost X or less and exile it. // When ~ enters the battlefield, exile a creature card with converted mana cost 1 or less from your graveyard.

Pulop's Chosen: This might be too much power creep. Nim Abomination has the same stats as the Primal version.

I'd be interested to see this deck try some sort of big equipment combo with Kor Outfitter. Even without some big equip cost being ignored, it seems like it might be more useful than Kor Firewalker with some of your equipment you run currently. Something to think about