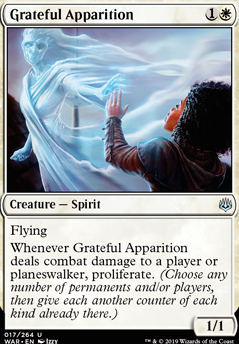 Whenever Grateful Apparition deals combat damage to a player or planeswalker, proliferate. (Choose any number of permanents and/or players, then give each another counter of each kind already there.)

Listen to the Praetors' Voice
by jicklemania

DragonSliver09, yes, I would like to have both, but there is no card that I can remove to make room for Merfolk Skydiver (actually, do I really need the triple redundancy of Thrummingbird , Grateful Apparition , and Guildpact Informant ?).

bushido_man96, you clearly have been following my posts, to know how I think regarding these matters.

You could improve the manabase by adding the Battle lands ( Sunken Hollow , Prairie Stream , Canopy Vista or Scattered Groves ) with Farseek.