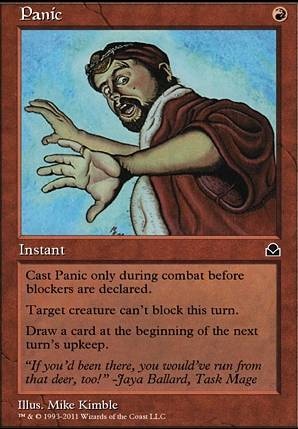 Play Panic only during combat before blockers are declared.

Panic occurrence in decks from the last year

ChibiNature I have chosen to cut Panic in favor of Thalia's Lancers , will let you know how it goes.

It Comes From The Soul

It's not a true hard counter, but have you considered Dash Hopes for your sideboard?

Also, if you want draw, red is better at cantripping, so maybe swap out Supernatural Stamina and Assault Strobe for something like Renegade Tactics ? Panic exists, if you want more than four copies of Tactics.