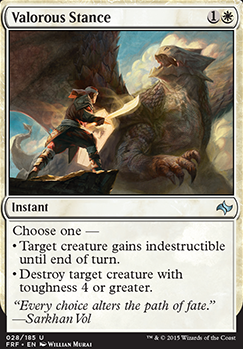 Valorous Stance occurrence in decks from the last year

Aurelia the punchy
by Kazo 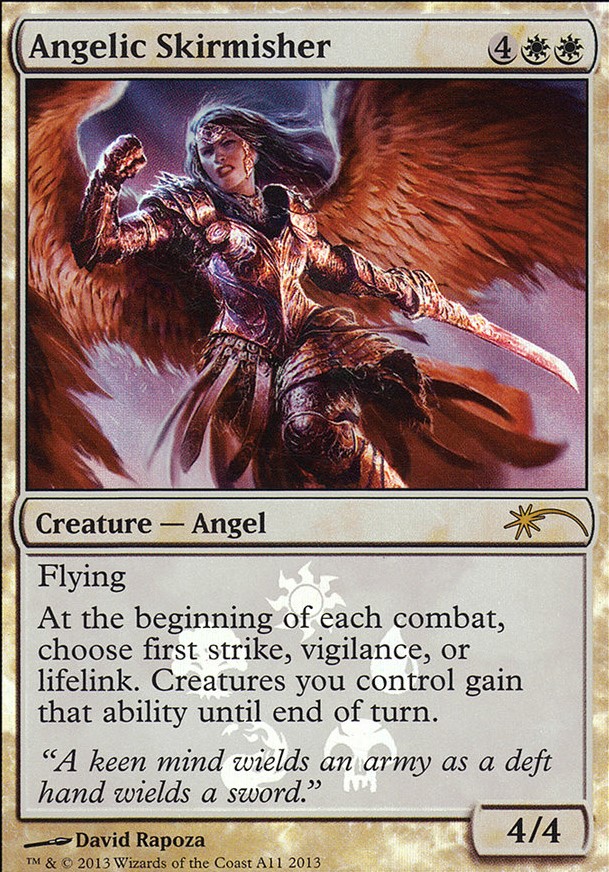 How about Valorous Stance? Maybe sideboard?

To add on to the Sunforger options, Valorous Stance is good both at protecting Saskia and removing an opposing threat, while Brave the Elements and similar effects will let you punch in through blockers.

Also, Comeuppance/Deflecting Palm are my favorite things to snag with Sunforger.

I'm not sure what happened with my above comment. The "spoiler" buttons don't seem to work anymore, even though they worked fine when I was posting it. :\ Must be a T/O bug. In any case, here's the same comment as above, but with accordions, which still seem to work.

RE: Declaration in Stone

You're actually fine using a Protection card that targets only one creature, because all you have to do is play it in response to the Declaration, targeting the same creature that the Declaration player targeted, and then Declaration will have an illegal target, causing the entire spell to fizzle. But that said, single-target Protection doesn't help against burn. I'd suggest Heroic Intervention to protect against both threats â and bonus points, it has a CAT in the art! XD

RE: Haze of Pollen

Before talking about this card specifically, first a quick note regarding "fog" effects: Some people actually feel similarly about "fog" effects as they do about lifegain â it doesn't deserve an entire card slot to itself. The rationale behind this is the same as with lifegain â a Fog neither develops your board, removes threats, nor decreases your opponent's life total. It essentially amounts to a lifegain spell that gains you the same amount of life as you were dealt in combat. That said, if you can find a Fog that does allow you to have an effect on the game, they can be great.

Alright, so on to your card choices. Unless you really care about the cycling, I'd actually choose a different Fog effect in its place, as both the CMC of Haze (2) as well as its cycling cost (3) are over-costed ( Fog costs 1 and cycling is usually 2). In its place, I recommend one of the following:

Of them, my favorites are Druid's Deliverance and Heroic Intervention.

Like I said before, I already feel like you DO have heavy-hitters (Pridemate, Sovereign, an eternalized Pouncer). The only thing Oketra has that they don't is indestructible (and a high-costed token producing ability). But Oketra also has the drawback of potentially being useless, as well as having no synergy with Sovereign or Regal Caracal.

That said, if you really want the Indestructible (and temporary Indestructible from instants like Valorous Stance or Heroic Intervention aren't good enough), then I recommend Fleecemane Lion â an efficiently-costed early threat that later becomes an Indestructible, Hexproof 4/4 â or Temur Sabertooth , who has a repeatable Valorous Stance ability that actually combos nicely with both Regal Caracal (creating more cat tokens after re-casting) and Pride Sovereign (who can be Exerted, returned with Sabertooth, then re-casted next turn untapped and ready to block).

Sadly, neither of them benefit from the Monument's mana reduction.... but honestly, I don't think that's the most important element of your deck to be building around. Monument is a nice "extra" if you happen to draw it and have high-CMC white creatures, but it's not a necessity for the deck to function well, IMO.