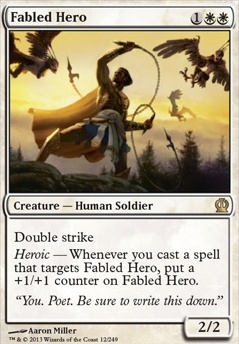 Heroic -- Whenever you cast a spell that targets Fabled Hero, put a +1/+1 counter on Fabled Hero.

Quick, Fast, and in a Hurry (A)
by Nickosis

I was a little surprised that I didn't see Favored Hoplite Hero of Iroas Fabled Hero Kytheon's Irregulars Akroan Crusader to represent Jason, Achilles, Hercules, Odysseus, Hector, Perseus or any of those people.

Hero of Iroas isn't doing much for you since you're not playing auras. You might try Fabled Hero or Wingsteed Rider instead. You also might want to add in some more multi-target spells - Gird for Battle , Launch the Fleet , and Cauldron Haze are all good budget options.

I suggest you use your remaining 8 slots for: Akroan Crusader , Fabled Hero , and/or Favored Hoplite . All of those pair well with Feather, the Redeemed , which I suggest you run 4x. Even though it's legendary, since it seems like it's at the crux of the deck, it's essential to do everything possible to play it.

Deflecting Palm is usually useful in a boros sideboard.

In terms of deck building, my best advice is to keep your deck hyper-focused on a wincon - make your deck find the wincon, protect it, and execute it and do that 2 out of 3 times within 5 turns. Keep spells to the absolute minimum CMC. There's not really great ramp in red or white, so odds are, spells over 4 or 5CMC won't see hardly any play. Your 1-2CMC spells are a deck's bread and butter. Be sure you have include enough to get them every game.

I try to include the following mechanics in all my decks in some form or another:

I slapped together a deck for Feather, the Redeemed recently. (Feather's Cap) It's focused on the Heroic mechanic, and because of those spells, also tokens and +1/+1 counters. It's far from perfect, but the creature CMC curve is decent and you might find some spells worth considering there.