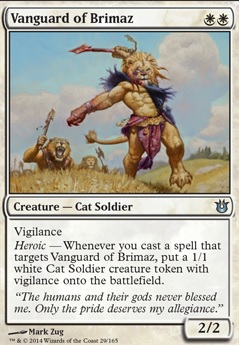 Heroic -- Whenever you cast a spell that targets Vanguard of Brimaz, put a 1/1 white Cat Soldier creature token with vigilance onto the battlefield.

If you find yourself wanting more token makers, Vanguard of Brimaz is another option. You could also run tutors to find them like Recruiter of the Guard and Imperial Recruiter.

Additionally, Feather is a very mana-hungry commander. Because of that, I recommend you up your land count to 38 lands. You need to consistently make your land drop every single turn with this deck, so you need to have a healthy land count.

Now besides those, I've just got a few tips when it comes to building a Feather deck. Many Feather decks run into the problem of wanting to do too much. You said you want your build to be the token build with Voltron as a back-up. I think that's great. I see you running cards like Iroas, God of Victory and Elesh Norn, Grand Cenobite that support the token theme that I don't see others run in Feather decks, so kudos to you for those. With that in mind, you might want to reconsider running the burn cards you currently have since they don't support tokens nor board-wipes.

Okay, let me get into important pieces of Feather decks. Feather is a powerful commander, but she has one serious flaw- if she's not on board, your deck falls apart very quickly. When she is out the cards in your deck as incredible, when she's not they're quite bad. Your deck relies almost entirely on synergy, so you need to make sure you protect Feather. With that in mind, figure out how many low-cost protection spells that target you need to consistently protect Feather. Basically, enough so that you always have a way to protect Feather when you play her.

Now, as far as ramp goes, I find you really want your ramp to be two-mana and be able to produce colored mana. This way, you can play Feather on turn 3 with one mana open to protect her.

You've got a solid list already, I think the suggestions and some thoughtful consideration on your part can make it even better.

Akroan Crusader and Vanguard of Brimaz seem to be showing the wrong tokens.

First impression: You have a lot of things going on, it will keep you busy every turn. In fact some of your ideas are good but fall short of executing with a bang.

I see you have Akroan Crusader , Phalanx Leader , and Vanguard of Brimaz . These cards point toward a token build but I do not see any pump spells like Titan's Strength , Mighty Leap , and Artful Maneuver .

You have Aurelia's Fury in here. Did you know you will need 6 mana on every opponents turn to lock them down? That's 18 mana per round. Unless you have Paradox Engine or a bunch of Treasure Tokens this idea will not be viable.

Short answer: Concentrate on tokens, add Assemble the Legion to the deck and a lot of pump spells and combat tricks and you'll have yourself a fast deck that pew pew with Sentinel Tower and Aetherflux Reservoir while pinging them with Guttersnipe , Firebrand Archer , and Electrostatic Field .

Seize the Day -> Cute, but I probably don't win with single creature combat

Flickerwisp -> Too much blink, and not enough blink targets

Gilded Lotus -> A bit expensive and lots of my spells are 1 mana, not 3

Unwinding Clock -> only useful with a handful of mana rocks

Mountain and Plains -> what was I thinking with only 33 lands. It's a cheap deck, but still...