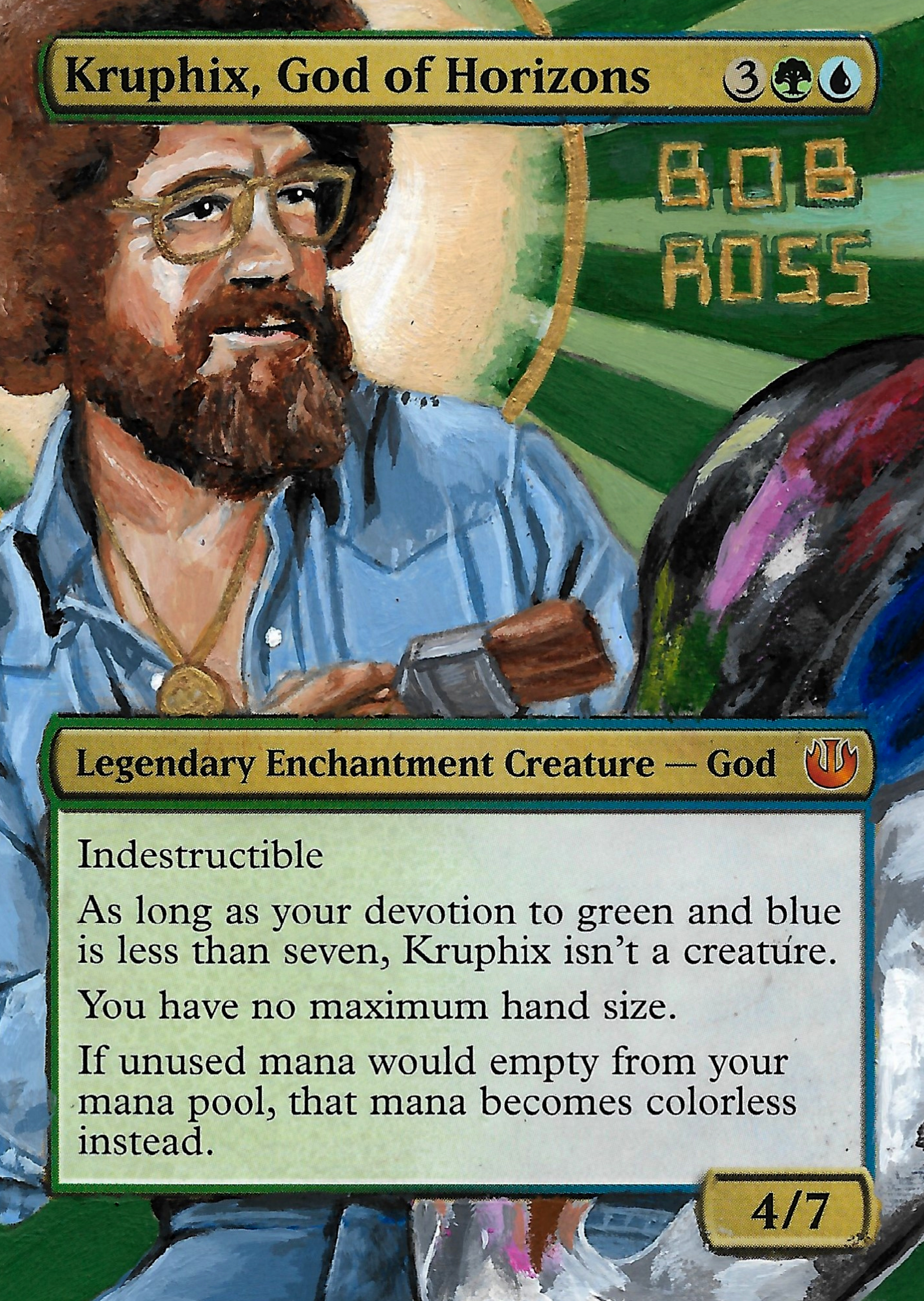 I am always looking to improve my list and welcome all constructive criticism, questions, and suggestions. I try to get back to all comments as quickly as I am able. Thank you for viewing my Kruphix Lands Matter Primer.

âKruphix is the eldest of the gods. The enigmatic god has dominion over the potential, the distant, and the unseen. Thus, he is seen as an oracle of dreams. He also governs navigation, mystery, and the cycles of time and is the keeper of mysteries that no others are meant to learn.â (Source)

A good general helps the player win but a good deck should be able to function and win without the general. Not only does Kruphix, God of Horizons act like a second Reliquary Tower but he also stores all the extra mana the deck produces for larger spells that help you win. Once Kruphix, God of Horizons is out he is incredibly hard to remove. Anything that destroys enchantments or creatures doesn't work on him. Furthermore most of the time things that exile creatures won't affect him either as he is only a creature when your devotion to green and blue is seven or more. Kruphix, God of Horizons might not quite fit the theme of lands matter but he is a great support general.

You may enjoy lands matter Kruphix if:

You may not enjoy lands matter Kruphix if:

Other lands matter generals you might want to consider.

The Gitrog Monster: Unless you are running this deck at full power against other cEDH decks I would recommend away from The Gitrog Monster. That being said The Gitrog Monster, when built right, is the most powerful commander around the theme of lands matter. The reason for this is The Gitrog Monster offers consistent extra card draw and a way to play extra lands. The deck then wins by looping the land Dakmor Salvage. If you want to build this deck I recommend looking up the current list on the cEDH Database. Also be sure you understand the Dakmor Salvage combo lines as it isn't very intuitive.

Tatyova, Benthic Druid and Aesi, Tyrant of Gyre Strait: Two very good alternative generals to Kruphix. Both of them give you tons of card draw with the downside of making Planar Portal, Tooth and Nail, Genesis Wave, and Finale of Devastation harder to pull off. I personally prefer them in the 99.

Yarok, the Desecrated: A commander all about ETB triggers. This even includes lands. I have tried running Yarok in the past and like him on paper a lot better then in practice. The problem is you want to run a lot more ETB cards that fetch lands into play. This leads to running suboptimal cards that provide insane value when Yarok is in play and are lackluster when he isn't. The black color identity does give access to better tutors however.

Lord Windgrace: Lands matter utilizing the graveyard. This deck tends to uses mass land destruction to set everyone back to the stone age. Lord Windgrace is used to reestablish a board presence afterwards.

Karametra, God of Harvests: Without blue you lose counterspells and card draw. However you do get the trade off of having better removal in white. You also get Knight of the Reliquary.

Lands matter started becoming popular in the Zendikar block with the introduction of the keyword landfall. It has also become popular in modern with Titanshift and now Amulet Titan. The strategy is very much so viable in EDH as well.

A friend of mine in college (around 6 years ago) came up with the rough draft of this deck. He ran Edric, Spymaster of Trest as the general and used that general as card draw and a deterrent from early attacks. He was also the one who suggested changing the general to Kruphix, God of Horizons a few years after I bought the deck from him. I have made many changes to his list over time. The big one being that the deck was originally mostly moonfolk tribal. However over time the moonfolk I run got whittled down to only the best two for more consistent land bounce like Cloudstone Curio and Sunder. I also added in more player interaction in the form of counterspells and removal.

Step 3 (Optional): Cast Genesis Wave for all the mana you have available or cast Tooth and Nail entwined.

Step 4 (Optional): Set up a counter lock with Soratami Savant.

Step 5: Get Avenger of Zendikar or Rampaging Baloths into play.

Step 6 (Optional): Rite of Replication kicked on Avenger of Zendikar or Rampaging Baloths.

Step 7: Ramp more. Win off of the tokens from Avenger of Zendikar or Rampaging Baloths.

Back Up Infinite Combo Plan

Step 2: Give your Walking Atlas or Sakura-Tribe Scout haste or wait for summoning sickness to go away.

Sep 4: Activate Walking Atlas or Sakura-Tribe Scout to put a land into play.

Step 5: Retreat to Coralhelm will trigger off the landfall. Use that trigger to Walking Atlas or Sakura-Tribe Scout.

Step 6 (Optional): Repeat this loop to put all lands in your hand into play.

Step 7: Use Simic Growth Chamber (targeting itself) or Ghost Town (on an opponent's turn), or Oboro, Palace in the Clouds, or Cloudstone Curio, or Meloku the Clouded Mirror to keep this loop going infinitely.

Step 8: Win off of Meloku's 1/1 tokens or another landfall trigger discussed in the 'How To Win' section.

Several people have suggested cutting Planar Portal for Planar Bridge both in person and online. I would be inclined to agree if I wasn't running Seedborn Muse, Alchemist's Refuge, and Leyline of Anticipation. This deck plays more like a combo deck then your normal Simic big creature Timmy deck. Being able to fetch any response to any situation on your opponent's turn is a dream come true. If they don't force you to answer something you can fetch a combo piece and play it. Now you might think getting Planar Portal, Seedborn Muse, and Alchemist's Refuge / Leyline of Anticipation into play at the same time might be a bit challenging. However thanks to Genesis Wave this is not as hard as you think. As long as you hit Planar Portal and one other piece Genesis Wave typically gives you enough lands to fetch and play the last part of the combo.

There are a few small differences in the current list and this section. I spent hours typing this section and formatting it a few years ago. I am not redoing that work anytime soon unless major changes are made to the deck.

Changes I Want To Make

Information on Alters in the Deck

The true strength of this deck is that it runs so much land utility early game that it is a very resilient deck in the mid to late game.

Even when it comes to land destruction which is a perceived weakness of lands matter decks that don't use the graveyard. It is able to recover. I was playing against a Lord Windgrace deck with this deck in a four player pod. Lord Windgrace played a turn two Smallpox and turn three Noxious Revival to recast Smallpox. I managed to keep dumping lands into play and win that game. Granted I had a very good opening hand. But Kruphix can certainly play around land destruction. Even when it comes to mass land destruction this deck is typically able to recover before it's opponent's are able.

One weakness of this deck is that it has to hit it's early game utility and then refill it's hand. Some games I've played I either kept a bad hand or had key utility interrupted and had to sit around waiting for my hand to refill.

Another weakness I've noticed is when Kruphix, God of Horizons keeps being exiled or countered. As stated in the section âWhy Kruphixâ I do not need Kruphix to win. However because of the utility he provides it slows the deck down when he is continually answered.

Luckily for me the biggest weaknesses of this deck aren't commonly run in EDH. And that weakness is anything that punishes life totals for lands entering play or tapping. Some examples of these cards are Manabarbs, Polluted Bonds, and Zo-Zu the Punisher. If this deck stands any chance of winning cards like these must be answered.

Scute Swarm, and Tireless Provisioner have both proven their worth in testing and are here to stay. I still defend Cultivate, Kodama's Reach, and Temple of the False God as having a home in this list. Look back at my last update made on June 28th, 2021 for my rational. Three major card swaps were just made today and are as follows: