Knight of the Reliquary gets +1/+1 for each land card in your graveyard.

, Sacrifice a Forest or Plains: Search your library for a land card, put it onto the battlefield, then shuffle your library. 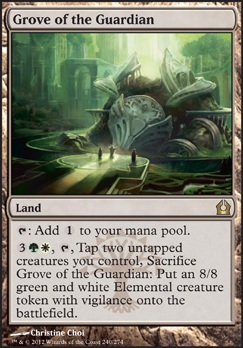 Knights of The Reliquary Tower
by SaiNoGo 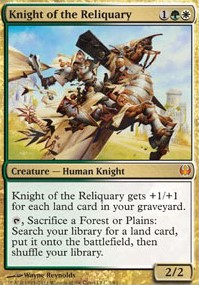 Retreat to the Reliquary
by Divinity_infinitum 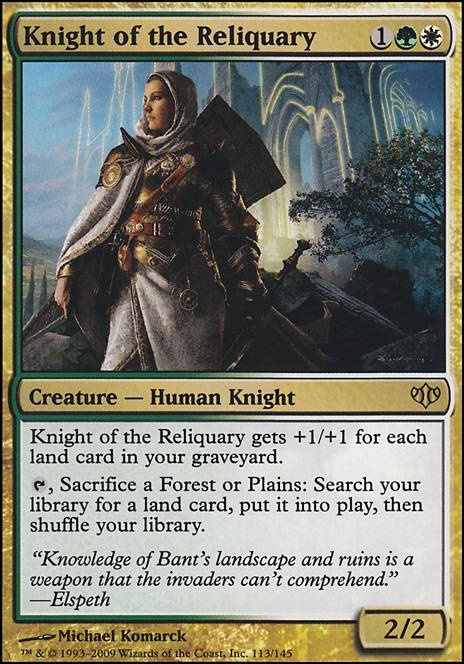 Knight of the Reliquary Discussion

Yavimaya, Cradle of Growth is not necessary, but mainly in there for Knight of the Reliquary and a way to tap a fetch land for mana in case itâs needed. Prismatic Vista more specifically since I run three basic lands. Iâm also considering Arbor Elf to go with it for Gaea's Cradle shenanigans.

DreadKhan About the Rebuff the Wicked i placed Mana Tithe in place of that card since i thought it would cover more cases.

Bow of Nylea is a great idea.

If i include bounce lands i don't think Ohran Frostfang would be a good idea since he is quite expensive in comparison to the rest of the deck.

Maybe a substitute to Knight of the White Orchid would be a good idea? I heard Knight of the Reliquary was good but i can't really see his use, or maybe some Wilt-Leaf Cavaliers ?

I would also recommend Knight of the Reliquary as it's quite consistent to activate in a draw-heavy GW only deck, worst case functions as a dork and has a huge ceiling in grabbing hall of heliod's generosity and nykthos. Having a card like her filling the grave with lands does also make Life from the Loam better (though as you can prob tell by now I am biased towards that card).

I also think Divine Visitation, while a really solid win condition, might be somewhat inconsistent. By my count you have 5 sources of tokens that are smaller than the angels (Heliod, Siona, Arasta, Archon, and Dawn of Hope), most of which are quite mana intensive. With the relatively small amount of ramp it just appears somewhat inconsistent. I would HIGHLY recommend playing God-Eternal Oketra if you pivot away from Visitation as you do have a surprising amount of cheap creatures, on top of being easy to draw back into with so many draw engines.

Another small thing is potentially cutting some of the less-than stellar draw engines given what your commander gives you, like femeref enchantress, nylea 2.0, and vivien. There is a certain point where I feel some of these synergistic cards are still just worse than some staples, though that isn't necessarily me recommending you play them as they're likely less fun.

If you agree with any of these I'd fill some holes with land ramp as with an enchantress commander, mana will be your limiting factor way more often than cards in hand. I feel my suggestions may make your deck more generic for what its worth. Also I'd personally play Stony Silence but I am mean like that.

RCDBO: The Wonderful World and Everything In It

Reminds me some of my modern landfall combo deck. In fact, I knew about the sakura tribe + bounceland + coralhelm combo, but I somehow thought it needed 2 bouncelands because I forgot it can bounce itself - gotta change that right after this. But about the deck, there are definitely some other pieces you should add for extra combos.

Next, I'd add Valakut Exploration , since it's a great card advantage engine that basically functions like Tatyova for the purposes of this deck. It is also another wincon if u just repeat any landfall loop 40 times then let it clap all your opponents at once, in case you don't have the mana to cast another wincon or something.

Hedron Crab is a pretty obvious redundant copy of Ruin Crab , but since its only a wincon I don't know if its necessary.

I also run Thassa's Oracle but that might not be necessary if you can just draw ruin crab and play it for strictly less mana. You might want a way to get rid of Tatyova then, though so you don't mill yourself out.

Lastly, Knight of the Reliquary also has a really sexy interaction with Retreat to Coralhelm , netting you 1 mana each time and repeatedly generating landfall triggers (not infinite though!).

Have you tried maybe like 1x of Faith's Reward as a Brought Back on crack? (damn that rhymed though)

Also have you considered splashing green for Splendid Reclamation and maybe Knight of the Reliquary + Harrow ?

Great list! I always liked the idea of splashing black for a landfall deck as Ob Nixilis is qutie fun. I agree largely with zapyourtumor regarding limiting finishers/higher cmc creatures to opt for more aggro low cmc creatures though. You can check out my landfall deck, i just like selesnya [landfall] for any inspiration. I was motivated by the power of Knight of the Reliquary and Felidar Retreat