+1: Untap target land you control. Until your next turn, it becomes a 5/5 Elemental creature with haste. It's still a land.

-3: Return target permanent card from your graveyard to your hand.

-6: You get an emblem with "Whenever a land enters the battlefield under your control, you may draw a card."

Is it ok if I play a Planeswalker as a Commander?
by HexproofHarry 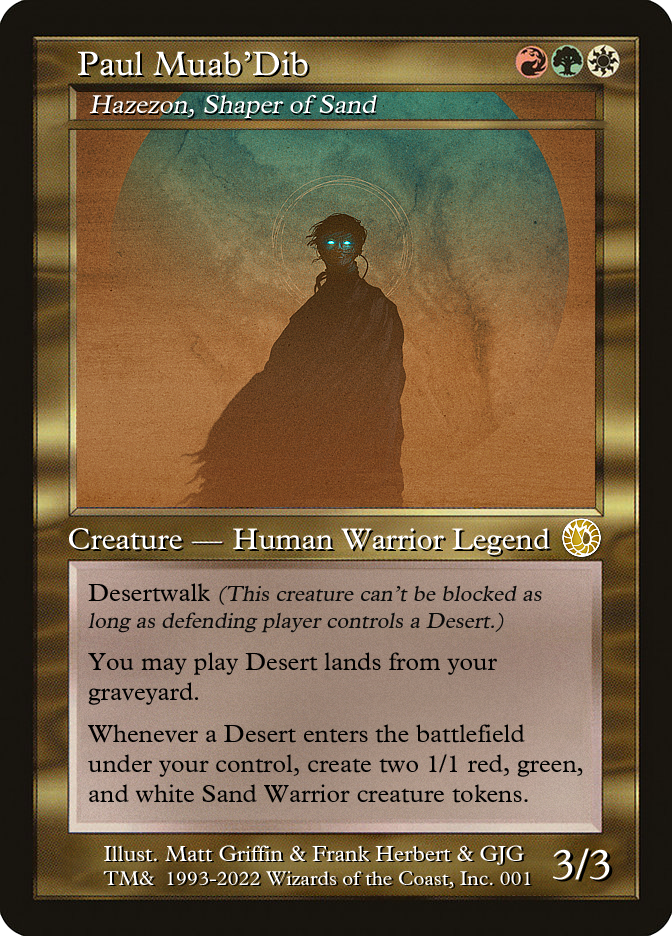 Grind I've considered Nissa, Vital Force but I've found Garruk, Primal Hunter better, because with Nissa I have to risk waiting a turn to get the ult (basically leave her open to removal and creature attacks), while with Garruk I can simply use him immediately for a quick Soul's Majesty; his actual ult is just for blue moon situations. But thanks for the suggestion, much appreciated!

Cool deck!!!
Have you considered running Nissa, Vital Force? Her +1 protects her with a 5/5, and next turn you ult her and for the rest of the game, all your landfalls cantrip and your ramp cards cantrip. Soo good!!!
Cheers and have fun!

ultima333 +1 , double digits now! - Disagree with your decision to remove mirrorpool. Highly versatile tool that warrants it coming in tapped. It all depends on what you're going for though. I just like have 2x avengers, regal forces, genesis waves, e-wits, etc...

No Eldrazi Temple? I see you have some eldrazi, it couldn't hurt given you are already running eye of ugin.

Rude Awakening - Cradle + Temple + Temple Copy + Temple Copy or just with a bunch of tokens on board. While it does make cradle vulnerable, you will have created enough mana to have won by that point.

How does, if at all, staff of domination go infinite in this deck? Perhaps I'm missing it or its in here for value or you dont want combos. If you added rude awakening, then you would be able to go infinite by untaping cradle, the now creature for more mana than it costs to untap staff. Not to mention, its a last minute resort beatdown with so many lands. It acts as a ritual, albeit late game. Sorry I'm so hung up on it, I suppose it's my pet card. Anyways....

Sanctum of Ugin - To search for either kozilek for draw or ulamog for removal. I like to have green yavimaya + eldrazi temple + sanctum + eye of ugin (reduces by 2, taps itself b/c of yavimaya for 1) and cast all of dust, then searching for kozileks for refueling.

I would swap half your forest with snow covered to more easily trigger field of the dead.

Silklash Spider - Is this a meta call, patching up a potential weakness? Or is this just one of the threats you mentioned? Other potential swaps or cards in general to consider are...

Nissa, Vital Force - +1 --> Untap cradle, your thespians stage/vesuva that copied an opposing cabal coffers, etc..., -3 --> Recursion rarely hurts, given that 72% of your deck is permanent based. -6 --> You only need to wait 1 turn cycle before you get an ultimate that says you are the archenemy

Nice deck, looks fun!!
Some ideas- Nissa, Vital Force is relatively easy to get her ult 2nd turn, and she defends herself with the +1. Landfall cantrip is great!
Also, Greater Good can be good too.
I also like Perilous Forays.
Im not convinced on zuran orb- i would rather run Constant Mists or another ramp spell. Anyway just some thoughts, cheers and have fun!!!

What kind of budget are you working with?

Azusa, Lost but Seeking is awesome for extra landfall triggers in a turn. Cabaretti Courtyard is also a good search land for doubling up on landfall triggers. Since you have a fair few lands with sacrifice abilities, World Shaper might be worth some consideration, too.

A few more good cards for this in no particular order: Embodiment of Fury, Awakening of Vitu-Ghazi, Druid Class, Field of the Dead ($$), Nissa, Who Shakes the World / Nissa, Vital Force, Omnath, Locus of Rage.

As far as things you can cut to make room: Canopy Baloth is kind of meh since it doesn't have any kind of evasion. Could swap this out for Embodiment of Fury. Might of Murasa could come out for the Awakening, since it's a similar costed effect (surprise giant blocker for only 1 effective mana more). Light Up the Stage feels out of place, could be cut for Druid Class for good gains.

Reviving Dose could also be cut for one of the Nissas - essentially, you're paying 3 mana for 3 life, where you could instead pay 5 mana for an epic planeswalker that makes you more land creatures. I'm also not a particular fan of Weather the Storm, although IMO it's at least situationally better than reviving dose. You could even cut both of those life gain spells and add both Nissas.

Also another comment- given you will be playing lots of lands, Nissa, Vital Force is a solid 5 drop bc you have a decent chance of getting her ult the turn after you play here, then you are in card draw city! 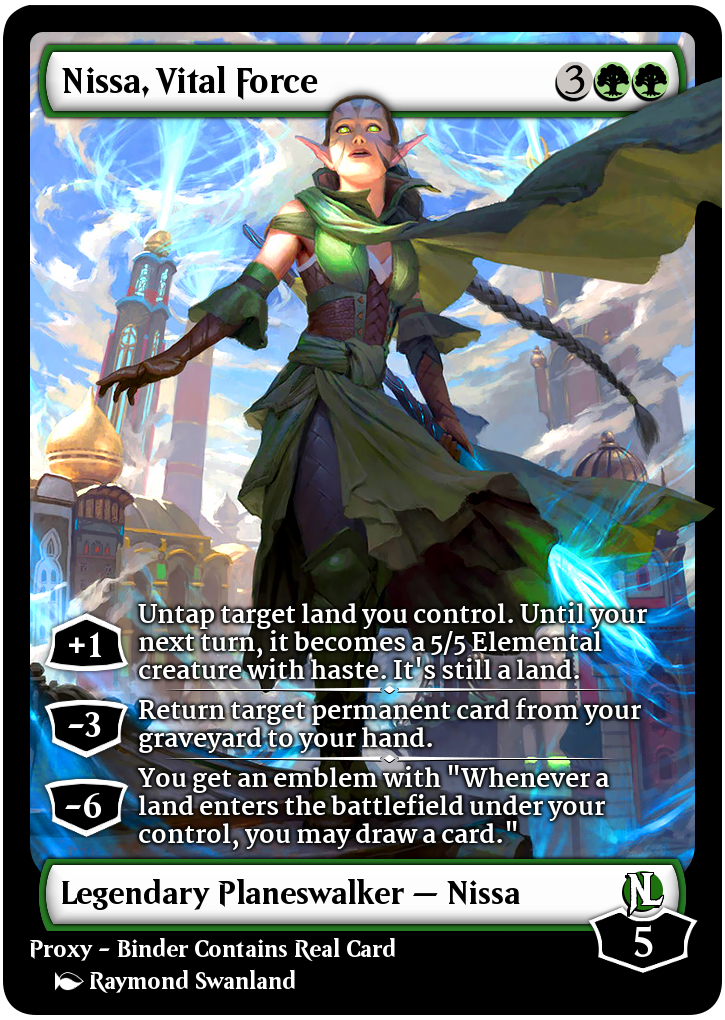 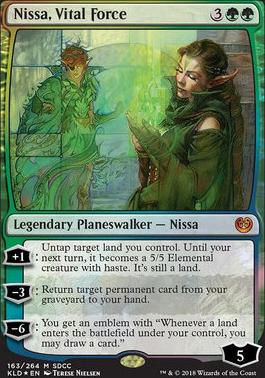 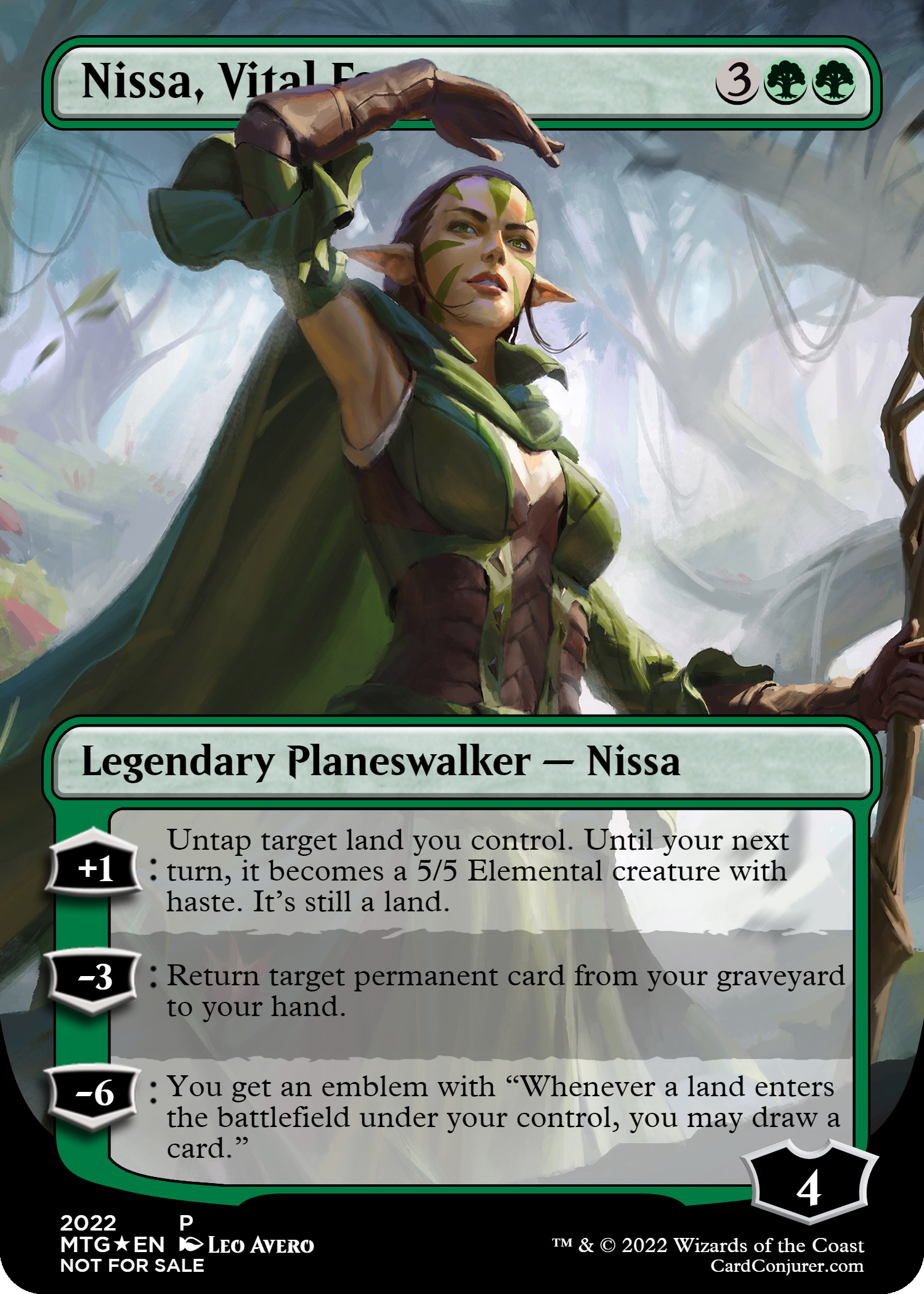