Being the Izzet fanatic I am, as soon as Galazeth Prismari was spoiled I knew I had to build him. Iâve always wanted a Urza, Lord High Artificer deck but Iâm not really into mono-blue decks.

This deck aims to create a bunch of artifacts, mostly treasure, and win with Hellkite Tyrant . Iâve got ways to tutor him up, card draw to dig through the deck, some removal to slow the game down, and an assortment of cards that produce multiple artifacts.

My play group is pretty casual so I didnât include Isochron Scepter + Dramatic Reversal but I might add it in later.

As for suggestions, I want to keep the price of the deck around $350 so keep that in mind when suggesting cards. Iâm gonna build it as is and upgrade some cards eventually.

Thanks for checking out my deck! I think itâs gonna be my favorite deck Iâve built once I complete it. I plan to turn this into a primer when I get enough games in.

Every deck needs some removal and board wipes/resets, it will help slow down the game while you make treasure.

For spot removal Pongify and Rapid Hybridization can handle most creatures that would cause you problems. Abrade is nice for small creatures or artifacts, this is a flex spot, thinking of replacing it with Memory Lapse . Chaos Warp can answer any permanent you need to get rid of.

Board wipes are pretty good in this deck because it doesnât have many creatures, Blasphemous Act is an auto include in any red deck, Mizzium Mortars can be spot removal or kill all your opponents creatures. Vandalblast for artifacts. Evacuation is a stand in until I get a Cyclonic Rift , you donât want something that will bounce artifacts cause you will lose all your treasure. Draconic Intervention will wipe most boards but keep the Dragons around.

Not much to say about card draw, it helps dig through the deck to find what you need. Few cantrips like Brainstorm , Ponder , and Preordain . Two looting effects in Faithless Looting and Prismari Command . Trying out Expressive Iteration cause I wanna play with it. Thoughtcast can be cast for cheap, and Windfall goes in all my blue decks.

Some of the card draw even makes treasure: Seize the Spoils , Pirate's Pillage , and Pirate's Prize .

5 big draw spells, Invoke the Firemind and Blue Sun's Zenith are the X spells I chose. Treasure Cruise and Dig Through Time are both excellent, Iâm not really using the graveyard except for Mnemonic Deluge and Mystic Retrieval so delving isnât a problem. Shimmer Dragon can draw a lot of cards and can be found with 3 of my tutors if I need it.

These are the artifact producers that produce multiple artifacts, there a two kind here, ones that give you a number of artifacts one time, and the ones that stick around a keep making them.

For the first kind we have Spell Swindle which also serves as some interaction, Brass's Bounty which can make a TON of treasure at the right time, Treasure Map Â  makes treasure when it flips and sticks around to draw cards. Dockside Extortionist is pretty expensive but itâs worth it, itâs a key part of the deck, it can make a whole lot of treasure at once.

The second kind really helps in drawn out games, Gadrak, the Crown-Scourge can surprise people because it counts creatures that died before it entered the battlefield so you can attack/board wipe and then play it and get some treasure out of nowhere, Goldspan Dragon is super good, makes a treasure every time it attacks and makes your treasure produce double mana. The cool thing is they can both be tutored up with the 3 dragon tutors.

Storm the Vault Â  isnât all that impressive on the front side cause the deck doesnât have many creatures but it does make some treasure and is insane when it flips. Trail of Evidence and Mechanized Production make an artifact on each of your turns and add up quickly. Storm-Kiln Artist and Saheeli, Sublime Artificer both create artifacts when you cast an instant/sorcery. And Saheeli, the Gifted can make artifacts and can straight up double the amount of artifacts you have for a turn.

This deck has very few win cons, I guess theoretically you could win by just attacking with dragons but I find that very unlikely.

The main win-con is Hellkite Tyrant . There are three ways to tutor it up, Magda, Brazen Outlaw , Sarkhan's Triumph , and Dragonstorm . The latter two can also be tutored up via Solve the Equation , which is a stand in for Mystical Tutor for now.

Once you tutor it up and get it in play you need to wait a turn to win normally so I have Lightning Greaves to protect it from removal. Now waiting a whole turn cycle isnât always advisable because of board wipes and such so I included Savor the Moment as a cheap time walk so you donât give your opponents the chance to untap and look for an answer. Stitch in Time can work as well, if youâre lucky! Itâs in here because itâs a pet card of mine, gonna replace it with Final Fortune eventually. 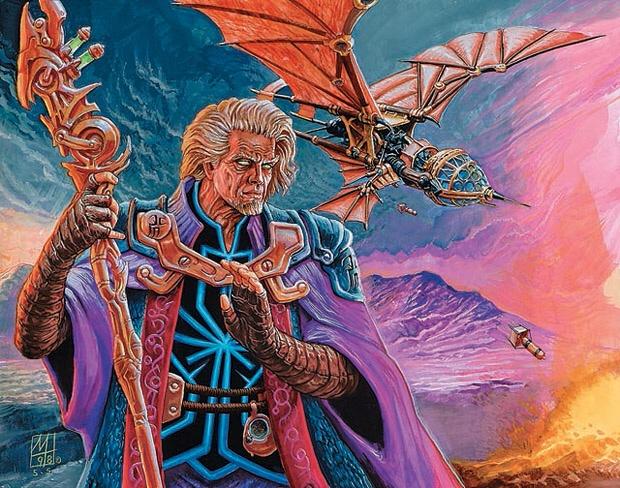 Thank you for looking at my deck, leave a comment and let me know what you think about it!

Rebuilt the entire deck, made it more combo-ish.

Niv Mizzet Parun Burn them All