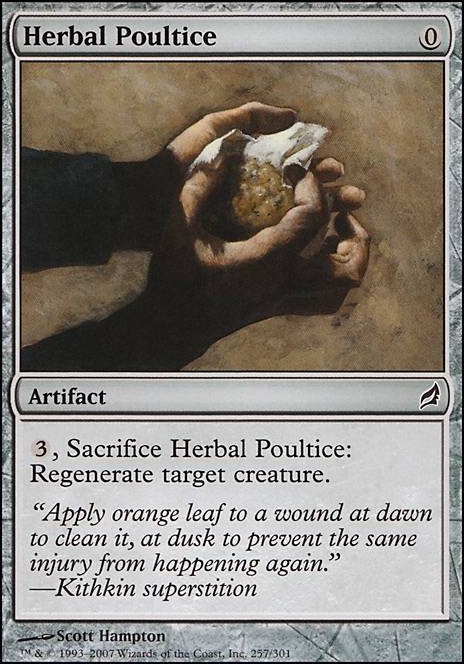 Herbal Poultice occurrence in decks from the last year

Balaam__ yeah my idea was to use regeneration Ring of Xathrid, Herbal Poultice, Medicine Bag, but yeah I should add more. Thanks!

Welding Jar is just a no cost version of Herbal Poultice . It would be great with this deck as you wouldn't need mana open to save your creatures.

@Bchong: Everything that jaymc1130 said in comment 12. But a few other things to note:

Also note that Conjurer's Bauble is already in the decklist. That is the second recommendation you made that I already have.

Lastly, most of the "pricey" cards in the decklist ($5 or above) were cards I already owned, or were able to acquire for a lower price than listed here on the site (such as purchasing the Engineered Explosives from my friend for only $8.00 as opposed to the CardKingdom price of $18.00; or the Aetherflux Reservoir that I traded for at no monetary cost). ~$26 is the cheapest I can find Mana Vault on CardKingdom and even Lotus Petal is ~$9.00 at the low end, both at less than Near Mint conditions. While they are incredibly effective at what they do and would help the deck tremendously, they are simply too far outside of my budget for a single card, especially when they don't directly represent win-conditions the way that Aetherflux Reservoir does. I am certainly planning on buying a copy of Lotus Petal or two eventually, since it is much more within my general budget for purchasing, but at the moment it is simply not an option for me.

A decent set of cheap or free artifacts to run would be Herbal Poultice , Phyrexian Walker , and Conjurer's Bauble

Also, while it isn't super cheap (money wise), I would recommend running Wear / Tear in place of Disenchant. Wear / Tear can be picked up for under $2

I read some articles about this deck and I am of the opionion that Lotus Petal , Welding Jar , and Herbal Poultice are better then Ornithopter . I think you can find some more decks similar to this one here on TO.