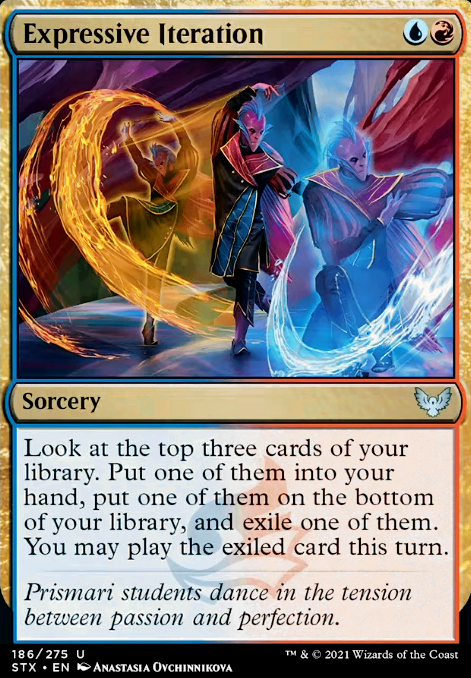 Look at the top three cards of your library. Put one of them into your hand, one of them on the bottom of library, and exile the third. You may play the exiled card this turn. 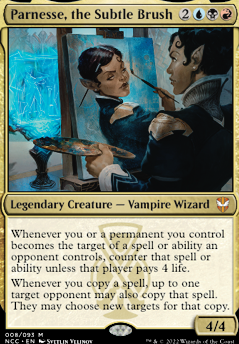 Captain America and his friends (Golems);)
by PumpingWizard25 Welcome to the club! For this deck, I'm not sold on Spellweaver Eternal. I would switch it for something like Soul-Scar Mage, which also gives you another one-drop. I would also suggest some more card draw/filtering, along the lines of Expressive Iteration. Opt and Serum Visions also could work, depending on how much money you're willing to spend.

yeah Expressive Iteration is a great spell but the sorcery speed just kinda kills it in this shell... my bro was originally running Light Up the Stage and just came to the conclusion that the INSTANT speed cantrips were where it was at... Opt, Manamorphose, Expedite just allow to sling spells and keep digging for more ammo as needed and combined with the value of Lava Dart and the phyrexian mana spells like Gut Shot/Mutagenic Growth he just closes out games really really quickly if the creatures dont die to removal he just wins.

Icbrgr i think Gut Shot is going in. i think im killin Bedlam Reveler and Expressive Iteration i cant imagine it would be super difficult to splash white i just dont wanna end up getting muddled with mana and i think ill have to pump the number of lands up for white. thank you so much for the help.

@ColonelCards yes the classic blunder of "Dies to removal" certainly poses an issue with the strategy... the way this deck aims to play through removal and disruption is countermagic via Censor/Boros Charm and draw power through Opt, Consider, Expressive Iteration to dig through the deck to find additional threats/answers.

I assume "bootleg phoenix" is referring to Arclight Phoenix deck lists? There certainly are a lot of similarities in the playstyle but I think it'd be a bit shallow to label all "spell spam/spells matter" decks as knockoffs of one another... Much like saying all variations of Aggro decks are a bootleg of RDW.