Search your library for a Dragon permanent card and put it onto the battlefield. Then shuffle your library.

Dragonstorm occurrence in decks from the last year

Torbran Playing With Fire
by Bri_kit 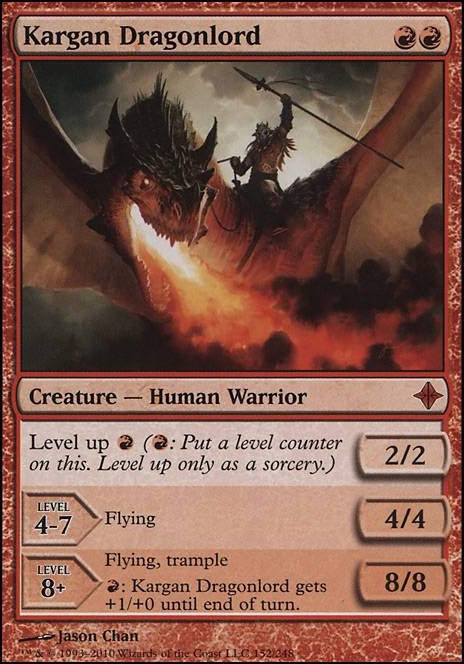 triproberts12 on Commanders that create an interesting ...

I think the biggest thing to avoid, in my experience, is relying on too narrow a strategy to make a deck "unique."

I built a Dragonstorm deck under Kess, Dissident Mage , but every game followed the formula of draw/tutor cards, cast rituals, win or die immediately after being punished by removal. I built Tatyova, Benthic Druid as druid tribal, but it inevitably ended with me digging into Cyclonic Rift or Craterhoof Behemoth every game.

A unique strategy needs enough singles to fill the 99 that it doesn't play out the same every game, or else it will be miserable to play and to play against.

Nice build! May I recommend a copy of Dragonlord Kolaghan , Nicol Bolas, the Ravager  Flip and Dragonstorm ?

Falcoshin As in look top 6? Or the entire library, pick the best Angel, Demon, and Dragon and stuff them into your hand?

The last one is definitely too overpowered, the closest we get to multiple card search would be something like Shared Summons which is 5 CMC. Otherwise you're looking at Conflux , Uncage the Menagerie or Firemind's Foresight type of cards.

The cheaper ones would be something like Congregation at Dawn which is significantly worse.

Considering we already have Kaalia of the Vast to cheat the cost and Kaalia, Zenith Seeker to find gas, I would think it wiser to have Kaalia's signature spell be something different but beneficial to those abilities.

Also yeah, DemonDragonJ basically casting Dragonstorm without storm at 3 CMC or close would be too powerful.

Ideas for another way to encompass her signature spell:

She cheats out big Angels, Demons or Dragons with her first iteration, and finds them with her Zenith Seeker iteration.

Perhaps her signature spell should utilize those big things on the board, or bring them back from beyond the grave for another round.

"Return target Angel, Demon, and/or Dragon creature card from your graveyard to your hand."

"Return target Angel, Demon, and/or Dragon creature card from your graveyard to the top of your library in any order.

It doesn't do much here and now but it secures that future draws are at least worthwhile gas. Basically a flipped Congregation at Dawn with an upside.

I would be careful about providing too much tutoring help to a deck that cheats mana costs in general.

Battlecruiser is just control/ramp, it's not unique enough to warrant its own archetype. Aikido and spellslinger I feel aren't descriptive enough of what they are. Spellslinger is just "permanentless" and can be renamed as such. Aikido isn't useful in an english speaking site. If hubs aren't a presently top-tier deck or using a keyword/specific card, I feel like they need to be much more easily understood by people who see it in the hubs list and go "oh! that's neat" and not "what the hell is this?" As such I suggest the terminology "Tactical Appropriation" as a replacement for Aikido.

At least, I hope you can rename hubs without issues.

Other hubs I think can be removed: Large ... what even is this?, Vehicle, probably Hive Mind as the archetype is now just Amulet Titan, Devotion and Energy since those aren't going to be comp decks in non-rotating formats until more devotion gets reprinted. Exalted since that has kinda died down quite a bit and is usually just voltron now. Cruel control since Cruel Ultimatum is kind of an underwhelming card now. Loam and Lands seem kinda interchangeable.

Artifact and Enchantment should be plural.

As for the requirements for a tribe to get a hub for tribes that don't have a competitive showing, I think there needs to be 10 cards of permanents that give static/permanent benefits specifically about that tribe that aren't one time effects, and instants or sorceries that care specifically about that tribe as their main effect (an example, for dragons, Belltoll Dragon wouldn't classify but Dragonstorm would). This means the following tribes don't make the cut: Angels, Cats, Demons, Knights and Minotaurs.

These should be added as a consequence of the above criteria: Elementals, Warriors, and maybe "flying matters" and "toughness matters" but that's up for debate, and probably isn't entirely a good idea if exalted should also go.