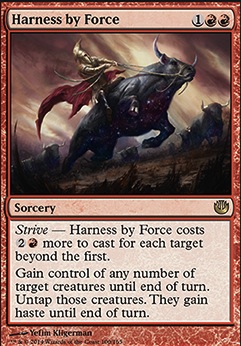 Strive - Harness by Force costs 2R more to cast for each target beyond the first.

Hofri, what's yours is mine then mine again
by Jbenoit65 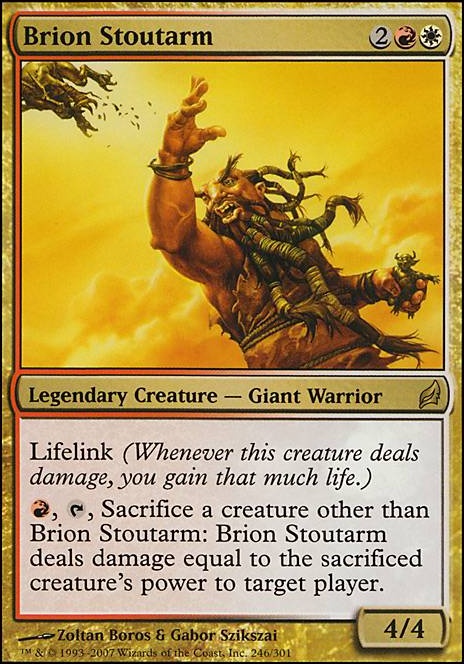 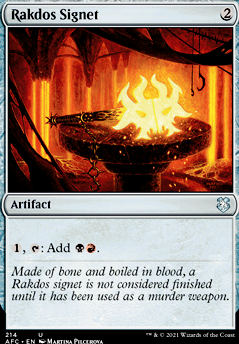 looking through other brion decks, have a couple of suggestions:

Mimic Vat - token generator that can exile an opponent's (or your) enter play effect, then sling it with brion

Harness by Force - steal multiple creatures, can dial in as many as you need

Word of Seizing - because split-second is stupid-good against control

Cradle of Vitality - gain life equal to power? better amp up the next thing to chuck...

Orim's Thunder - a boros staple, disenchant + burn in one card is a good value

overall, I'd probably toss the Fling and Thud over permanents that can sac for less, or get something else out of it (like Carnage Altar )

I thought of you right away when I saw this one, congrats. My musings, hopefully it's not all Captain Obvious:

Mana ramping for casting more: Seething Song, Mana Geyser, Brass's Bounty i think are must haves since they're all sorcery/instant so they can be effected by your commander to cast for less. Chandra, Torch of Defiance is a another good planeswalker to get mana and now you can have both planeswalkers out with the updated rules from August. You should add Vivid Creek to go with your vivid crag.

Dual Casting is nice to throw on a token, its a cheap way to copy a spell especially mana spells.Cast Through Time, and Swarm Intelligence are also good copy casters.

Other cards to lower casting costs: Primal Amulet  Flip is a must since it lowers cost of ins/sorc and then it transforms when you want to get a land that can copy a spell. Arcane Melee, Seal of the Guildpact, Ruby Medallion,Sapphire Medallion,Jace's Sanctum are also nice.

Cards that damage opponents: Electrostatic Field and Sphinx-Bone Wand i think are must haves since they deal damage for every inst/sorc casted. Banefire, Devil's Play are great since they have the (x) in the cmc which is great for mizzix since it counts towards what you want (x) to be and you can always get an extra counter for mizzex.

Merchant Scroll is a decent tutor

Protection: Propaganda, Wild Ricochet are great, Tablet of the Guilds is a good way for lifegain that red/blue lacks.Ionize is a great counter.

Great staples: Charmbreaker Devils is a must have for the returning of inst/sorc alone. Crackling Drake can get huge power. Hypersonic Dragon casting sorcery at instant speed is great. Structural Collapse destroy a land and deal damage, and if copy it, who wouldn't want that, besides your enemies of coarse.

Wincons: Reiterate + Turnabout and Grand Architect + Pili-Pala are infinite mana combos, add Past in Flames or any damage cards with (x) in it and its deadly. Enter the Infinite is nice to get your combo's. Harness by Force is great to steal your opponents creatures then attack them with it, it also gets affected by mizzix so if you have enough counters itll cost 2 red mana and 1red mana for each extra creature.