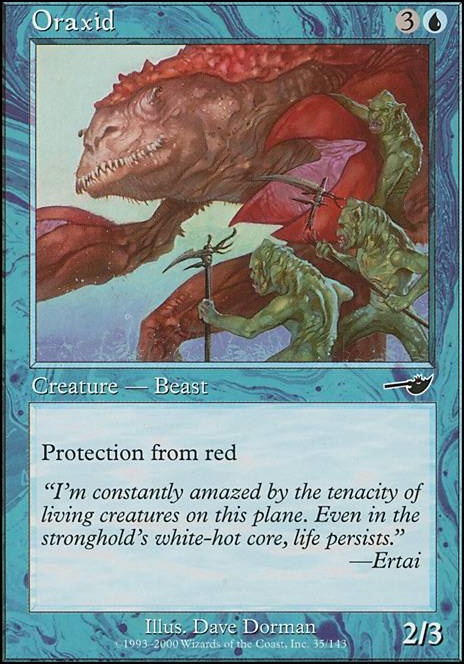 This is a semi-budget Kiki-Jiki, Mirror Breaker commander deck built around creature etb effects and creature control + creature sacrification. It does not include any infinite combos with Kiki-Jiki, cause they're not fun.

This deck wants to play mana rocks and small dudes with etb effects early. Then you hit the board with Kiki-Jiki, Mirror Breaker and redo your etb effects. While you have a small Kiki-Jiki engine going you should play some enchantments and artifacts to copy effects. Later on you should be able to find some bigger dudes that can be played with multiple etb triggers.

If nasty creatures are pestering you, like enemy commanders, there is a good deal of creature control available. Stolen creatures should be sacrificed at the end of turn. Multitarget creature control (ex: Mob Rule ) and limitless sac outlets (ex: Ashnod's Altar ) are a good match.

It's time to remove cards with little impact and replace them with more interesting effects. The $ price will for sure go up.

My playgroup is trying to avoid playing cards that can singlehandedly win a game in one turn, and Insurrection fits this category fairly well. Im swapping it out for a card I've played in this deck earlier, and that has some potential to be both fun and good.

The deck works fairly well at this state, so I'm tidying up the maybeboard.

The price of my budget decks keep rising, so I'm marking the current price to see how the value evolves.

Oops, these creatures are legendary and cannot be copied by Kiki-Jiki, Mirror Breaker .

OUT: Pia Nalaar and Pia and Kiran Nalaar

IN: Thopter Engineer and Goblin Marshal

Some of these sac outlets are just way too expensive.

OUT: Carnage Altar and Phyrexian Vault

IN: Grafted Wargear and Barrage of Expendables

I've got to playtest the deck, and a few things bothered me about the deck.

Primarily that the infinite combos (with Kiki-Jiki, Mirror Breaker and either Zealous Conscripts or Thornbite Staff and a sac outlet) were too consistent and not fun at all to win with.

Secondly that winning with the primary wincon of mass creature control was way too unconsistent. I was thinking I would regularly get a Insurrection effect with a costless sacoutlet like Goblin Bombardment , but as I was sitting on my ten 1/1 goblin tokens ready to block and stall the game, I never really drew any of the large creature controls.

I know these situations are very situational, both based on the current shuffling and playgroup, but it just seemed lacking. In the end, I enjoy tweaking, and if its just tweaking for my own games sake, so be it.

So the deck has been reworked to suit larger playgroups better. When I first made this deck I usually played with 1 or 2 other people, and I remember some pretty annoying commanders, like Meren of Clan Nel Toth . So back then my plan was just to red control + sac the opponents commanders asap, and then build up big guys later, like Bogardan Hellkite .

Now I usually play in larger groups, and altought we're playing casual, I really feel my deck falling behind. I think slowly building up to a good boardstate or repeatable combo is really what is the most beneficial in larger groups (as long as you don't make yourself too big of a target and get focused). It also seems important to keep some creatures hanging around for blocking and such.

With these ideas, I made the following types of changes:

The cards that didn't make the cut will probably reside in the maybeboard for some time to come.

I've decided to combine the expensive and budget versions of this deck that was on this website. This is the one I kept. I'm gonna keep the budget tag, so believe it wont grow super much in value, but I'm gonna have a look at some more expensive cards (mostly under 6-10$, unless I decide I need to use Purphoros, God of the Forge .

I am also adding a shitton of cards to the maybeboard so that I can easily make changes in the future without losing track of possible deck candidates. Deck updates will end up here in written form :)

As of the 17th of August 2020, some cards have really risen in value, and would probably not be considered budget anymore. Most notable are: Goblin Bombardment , Ashnod's Altar , and Thornbite Staff

Norin Likes to Play in League

Grenzo - Let's see what I want to do