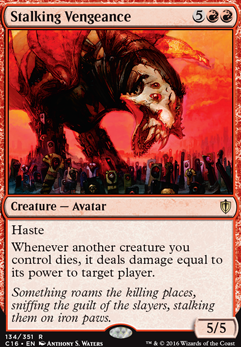 Whenever another creature you control dies, it deals damage equal to its power to target player.

Stalking Vengeance occurrence in decks from the last year

The Red and The Black: Sushi with Su-Chi
by DrummerGarrett 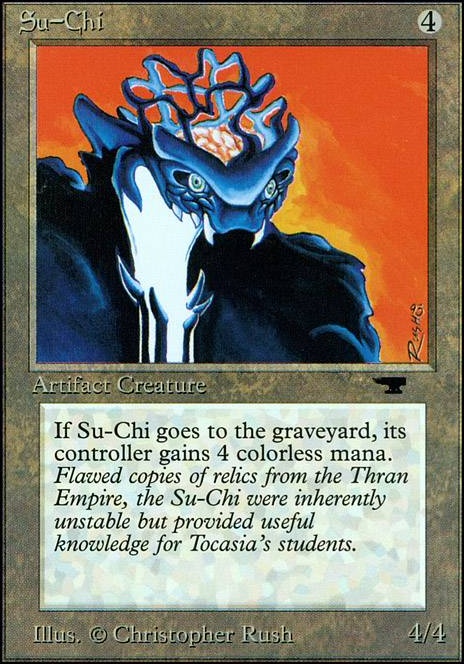 Yo king-saproling thanks for this! I did see a few of these when searching out for the list, but some of these are new to me! I have a few things to say about a card or two.

Lemme start wit repercussion, sharpshooter, and Neheb. I would 100% run these and they only didn't make the cut this time around because of budget. Hadn't made rakdos before so the first wave was all land base and a few hits. Stalking Vengeance made the cut as a budget repercussion tbh ^.^

Knollspine stands out to me. He could potentially replace yidaro for card draw to go for a full grip rather than a card here or there. Haste is a big deal tho. As for flamespeaker he is def interesting. I need to compare him to the card draw sin prodder provides, or even go more card draw main deck its a little too early to tell.

Syr konrad was close to making the cut. Tell me if you see him any of the five drops currently in the list.
Sadly, Insult / injury is 6 CMC and can't be run in the list and I already use dark ritual :)

Personally, my list decided to leave out too many of the mana dorks, since I've found that on average they seem a little more fragile and low impact for my tastes. I'd much rather have cards that put extra lands into play, and the same goes for mana rocks (Aside from the couple that are too good not to run like Sol Ring, Mana Crypt, etc.) I've been having some pretty good success with this change, though I will say it can definitely feel a bit slower sometimes.

In place of the mana dorks, I've opted to add in more beefy threats since that's the deck's bread and butter in the first place. I love that with Xenagos, you really feel like you're always threatening, since at any point you can always just slap down another huge stompy beastie and be right where you were before.

Return of the Wildspeaker has been a GODsend in my games, cause the pump effect and instant speed make for a very flexible card, and for 5 mana? Yes please!

Also curious about how you feel about cards like Warstorm Surge, Stalking Vengeance and the new Terror of the Peaks? This is probably very meta dependent, but I do see a lot of value in having ways to win outside smashing people, because someone could have a Glacial Chasm or a Constant Mists or any other way to hose combat, so they add some reach to make sure you can still handle the nerds that want to pillowfort themselves.

Xenagos is my all-time favorite commander, and I'm always looking to find different perspectives to reflect upon my own deck. I've also been tweaking and tuning mine over the past couple of years, so it would be great if you wanted to take a look! I'm definitely a "75%" player, and I have a lot of fun with my friends, but my local meta at my LGS specifically does lean a little more heavily into the competitive scene and it can feel a little rough, even against their "Casual" decks.

I love the list! Xenagos has become my pet deck at this point, and definitely my favorite commander by far.

Stalking Vengeance would be something I'd ask you to consider, because it has the potential to be a way more threatening alternative to Heart-Piercer Manticore. Granted, the manticore is 3 less mana to cast, but Vengeance checks every creature when it dies, so the damage potential is much higher. I've ended plenty of games by getting out Sneak Attack, then sneaking out the vengeance, and Blightsteel Colossus as well as any other big threats in my hand, and then sacrificing them at the end step (Or immediately to Greater Good) and instantly killing one or multiple opponents.

Xenagos is SO fun, and if you wanna take a look at my take on a build, you're more than welcome to!

So I second the inclusion of Greven, Predator Captain

(might even be a commander for this deck). Here are a couple other cards to consider: Warstorm Surge, Haktos the Unscarred, Stalking Vengeance and Vicious Shadows.

griffstick on Trouble in Pandemonium

I'd say add in Vicious Shadows and Stalking Vengeance to the mix and turn the Pandemonium against them for killing your shit.