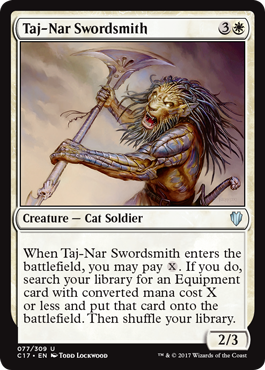 Taj-Nar Swordsmith occurrence in decks from the last year

Nahiri the Magpie
by Jah_Reggaeman

The Sun Was Block by His Wing

Stoneforge Mystic and Steelshaper's Gift are probably out of budget, but Relic Seeker, Stonehewer Giant, Taj-Nar Swordsmith and Steelshaper Apprentice are pretty budget ways to make sure you keep finding your important equipment most of your games.