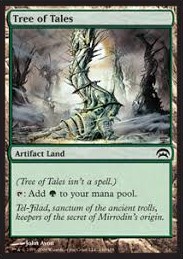 Speaking of ammo, Sporemound probably goes well with all those lands you got going there!

Ancient Den, Thornglint Bridge, and Tree of Tales are all also easy to include. They won't really slow down your mana, and can be sacrificed if you don't need them anymore. Power Depot might be worth considering as well- while you don't have much in the way of colored artifact costs, it also has modular to feed that theme.

I know I'm a year late to this party, but infinite black mana is totally achievable in Golgari and it's the reason I want to build Ishkana as a non competitive commander.

Urborg, Tomb of Yawgmoth + Cabal Coffers + Deserted Temple + Rings of Brighthearth is infinite black. You can fetch it pretty easily with Scapeshift searching up the three lands mentioned above as well as Vault of Whispers, Tree of Tales, Darksteel Citadel and Inventors' Fair to get ahold of Rings.

It takes a full turn from casting Scapeshift which is why I say I want to build it as a 75% non-cEDH deck, but a Scapeshift combo that wins without Valakut is kinda cool in my opinion.