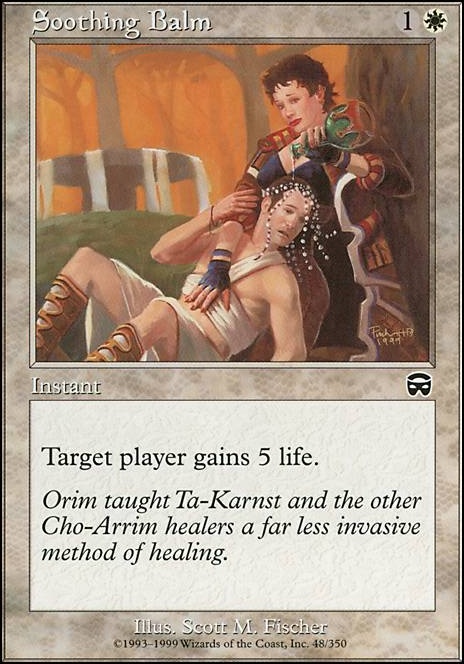 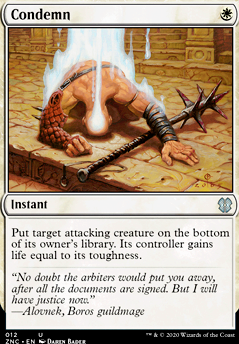 For more pain/gain consider replacing cards like Soothing Balm with cards like Sovereign's Bite , they work on their own, but even better with your commander!

Wicked! I've been wanting to do a deck with remedy myself for the longest time! You've nailed all the auto-includes, I think:) so I only have some plausible suggestions: Last Breath, Avenger en-Dal turns every card in your hand into a better condemn, Curse of the Forsaken if you target yourself :p Illumination? Swords to Plowshares although, it'll ruin the budget. Alabaster Potion = white fireball ;) Hope Charm for versatility. Laquatus's Champions hillarious! Misfortune's Gain for more removal? Reward the Faithful is fun. Soldevi Steam Beast for the lulz. Soothing Balm for the hurtz! Tonic Peddler turns every card in hand into a lava spike.

No heals for you!

Soothing Balm is a solid suggestion. Enlightened Tutor is better than Diabolic Tutor. Swords to Plowshares replaces Oblivion Ring easily. Grollub might be a more on-theme choice than Restless Apparition.

Thanks for the suggestions getoutofmywhey, I think I'll keep with Rest for the Weary over Soothing Balm, plea for guidance looks good but the mana cost is a bit high. Also Tainted Remedy's ability doesn't stack so no point in having two out. Diabolic tutor is an interesting one to have for one less mana than Dark Petition but the reason I do have Dark Petition is that the 3 mana it gives after casting can be used to play Tainted Remedy. Although getting it out one land earlier might trump that.