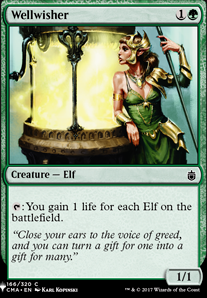 : You gain 1 life for each Elf on the battlefield.

Wellwisher occurrence in decks from the last year

Go Not to the Elves for Counsel
by WanderingSpirit 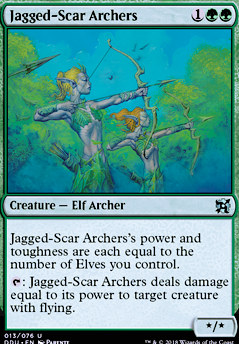 Where are the Quirion Ranger ? They seem a lot better than Vitalize because: -they're creatures for Lead the Stampede ; -they're elves for all of your elvish synergy; -you run few lands so returning the forest is often going to allow you to make your land drop; -most often, you only want to untap one creature, like a Timberwatch Elf or a Priest of Titania or maybe a Wellwisher vs aggro.

I would definitely run Winding Way as a 4-of in here because it's almost always going to draw you 4 cards.

cool deck.. you should drop a forest for Homeward Path .. if someone steals your ezuri in this current build you have no way of getting it back.

I would also cut a few of the dead elves like Essence Warden and Wellwisher for some protection. you seriously will get blown out if you play against blue or red and so you need cards like Veil of Summer and Heroic Intervention .. these will help push your spells through and the intervention will protect you from a board wipe (and also protect your lands)

I would drop cryptolith rite for Lignify because you have basically no removal. If someone drops a Linvala, Keeper of Silence youre basically toast

- Copperhorn Scout or Cultivator of Blades

Hey MagicalHacker, saw your vid on EDHrec. Seems like you're "moving on up" perhaps even to the East side... Puns aside, I require your assistance or suggestion and appreciate all the help you've given me in the past. I'm stuck between commanders and plan on liquidating one of my decks that just isn't playing like I want to (that being Karametra). So the commanders that I'm contemplating is:

Marwyn, the Nuturer: elf tribal more or less. Marwyn can go infinite with just a few elves and things like Umbral Mantle or capable of generating large amounts of mana with cards like Seeker of Skybreak or Quirion Ranger ECT. Finishers would be green staples Craterhoof Behemoth or Worldspine Wurm . Maybe Ulamog, the Infinite Gyre for laughs. Generate a lot of mana and cast a huge Hurricane or Squall Line offset by beat downs or Wellwisher . Heck Killer Bees would be a funny way to kill someone... Tighter budget due to less trade then the next 2 commanders.

Feather, the Redeemed : cantrips for CA. But this would feel more like Colton. But she also seems like the flavor of the month atm but reminds me of my old Zada deck so I have most the caltrops already before the price hikes due to the hype.

Arixmethes, Slumbering Isle : not your typical commander. Uniquely a land but can still be modified by how creatures etb as well as landfall. Can generate infinite mana with Freed from the Real and Pemmin's Aura for shenanigans. Not doing sea creature tribal so finding good lists is a little harder to find. Doesn't interact with counters like typical Simic commanders but becomes a huge 12/12 beater when activated. Lots of cantrips that allow for being unblockable.

Any advice or reccomendations would be greatly appreciated!