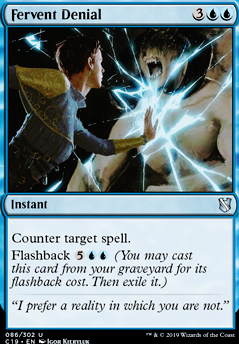 Flashback [[symbol:5] (You may cast this card from your graveyard for its flashback cost. Then exile it.) 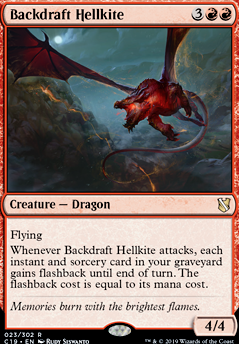 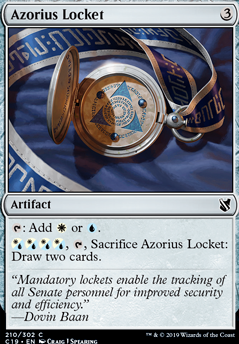 Let's do it again!
by NiftyCheshireCat

Re: graveyard counterspell: Fervent Denial has flashback, while Disciple of the Ring can "graveyard spellshape" a taxing counter

multimedia I was looking at building Mizzix deck here (non lab man version) with the flash back theme leaked I figure I would wait and see and I already know the main commander is meh.

Then you start looking and bam Elsha of the Infinite and now I am torn do i build a deck around her instead of Mizzix because it looks like you can have some real fun with her.

Now I really like some of the cards in Mystic Intellect deck but the deck screams terrible.

Really your only counter spell is a 5 cost piece of hot garbage with a 7 cost buy back basically you have no real counter spells in a deck focused on spells that has blue. Really wizards you would have been better of putting old school counterspell which is a common and cheap and a classic commander card as the only counterspell instead you put one of the worse flashback cards ever designed in the deck Fervent Denial

Major issues detected if too many players (6 players during the playtest) :

Phyrexian Gargantua+Tempt with Reflections --> drawing 10+ cards leads to a 20 minutes turn for the player who has to make his choices.

Fervent Denial --> too much question about "priority" : it seems that instant cards with flashback are not a great idea here.

Surrak_and_Roll You make some interesting points for Grim Flowering vs. Sphinx of Lost Truths. When casting the Sphinx I rarely pay the kicker cost unless its very late in the game. The draw/discard is still incredibly powerful as it gets rid of Dredge creatures/graveyard enablers that are stuck in your hand and generally helps filter unwanted cards. It being a creature is an added bonus as it enables Sidisi triggers and is able to be recurred easily. I've been happy with it so far but I'll try swapping it out for Grim Flowering to see how it plays. Thanks for the thoughts!

As far as flex spots go, I mostly consider Fervent Denial, Gnaw to the Bone, Shriekmaw, and Oversold Cemetery to be non-essential role players than can be moved around a bit. That being said, every card is replaceable so long as you maintain approximately 8 mana accelerates, 2 Board clears, 3-4 instant speed disruption spells, 8-10 card draw spells/abilities, and 4 utility creatures/spells. Those are my general goals when building all my decks. With this specific deck I'd generally avoid going below 36 creatures in order to best utilize Sidisi triggers.

Be a terrible person with Buyback, Flashback, and all their friends! Mizzix reduces the cost of all alternate casting costs. (Also reduced Awaken, but I didn't include anything with that, because I know how much a fan you are, and I think you have most the good Overload)