Fauna Shaman occurrence in decks from the last year 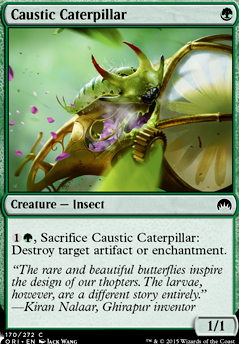 DeinoStinkus haha thanks! I think you're right about the Hunted Troll, I already have enough cards that spawn creatures on my opponents side, so I definitely try out Dowsing Dagger Â Flip. And so far I haven't had too much trouble getting out Phyrexian Obliterator due to Fauna Shaman and Painful Truths helping me grab it quickly.

don't buy these unless you have them

Life from the Loam... you still probably want this, but then you really want cards that let you play more than one land a turn... that's more like "lands matter mulldrotha."

...or save them for later as a reward!

If you wanted discard, Fauna Shaman and Survival of the Fittest seem good.

Bane of Progress > back to nature

Lmk if you want further suggestions.

I can definitely see the value of Fauna Shaman and Fiend Artisan, I prefer the Birthing Pod because the shaman only puts the card into your hand, rather than the battlefield, and my deck reanimates well enough that the artisan is rarely larger than 2/2. That, and the mana cost of the ability is lower on Birthing Pod.

You know tho just throwing this out there I've never been crazy about the pod I had a buddy that would build decks with a 3 cmc limit on all cards so the pod worked well for him, but I prefer to be a little crazier lol, I'm a much bigger fan of the Fauna Shaman and the newer Fiend Artisan I havnt actually got my hands on the latter but am excited to slot it in my meren deck.... anywho just saying

So, I've got a couple of suggestions, just off the top of my head that I think could greatly help you out, in both short term and long term:

-1 Nissa Revane +1 Karn Liberated My reasoning here is relatively simple. You're deck isn't focused on life gain and you don't run Nissa's Chosen. Her ultimate is wonderful, if, you can get there. But I think you can remove her because her ultimate is more of a dream than a reality.

-1 Lotus Cobra +1 Fauna Shaman I personally think that the cobra isnt really needed since you produce so much mana as it is. I think Fauna Shaman personally just helps you get there, a lot faster, and additionally its a Survival of the Fittest on a stick. Never hurts to have a second answer in case your first one gets blown up.

-14 Forest +14 Snow-Covered Forest I see that you're going for the Extraplanar Lens answer here which I can greatly appreciate, but since they are much easier to fins now, I would trade out all of your regular Forests for the Snow-covered Forests, or vice versa.

-1 Nissa, Vital Force +1 Asceticism Outside of the fact that we are dropping a same CMC permanent, I think Asceticism is going to do a LOT more for you in the grand scheme of things. Sure, Nissa, Vital Force makes a hasty, 5/5 elemental land for you, but its not something that I would rely on. The same can be said for her second ability. It's a more expensive Eternal Witness card altogether and I don't think it does enough in the deck to keep its spot. Asceticism protects your creatures in a couple of ways which is extremely advantageous in your case.

-1 Garruk's Uprising +1 Boseiju, Who Shelters All

Garruk's Uprising is just alright. It does some beneficial things, but not consistently. In some cases, I think you're going to find that the card is just dead in your hand more times than you would like. Another use commented that you need to be running more lands, and I think that that is true to a certain extent. Boseiju, Who Shelters All can let you cast an uncounterable Chord of Calling and more importantly, Tooth and Nail. Not to mention there are just other things in your deck that this also greatly synergies with.

-1 Wooded Foothills +1 Cavern of Souls Think of it as Boseiju, Who Shelters All but for creatures. Most likely naming elves.

-1 Garruk, Unleashed +1 Wirewood Lodge This Garruk isn't really doing anything for you. I think that he performs rather slow, and there are just better things that you can replace him with. We are still on the topic of lands so I think Wirewood Lodge is a pretty obvious choice. That card has an astronomical amount of value.

-1 Kogla, the Titan Ape +1 Vigor As much as I think Kogla can do some work, I think Vigor will serve you better. He's a literal pain to get rid of and things only get worse from that point forward. Kogla, the Titan Ape has targeted removal and in some cases I think that you may not be able to target some of your opponents more critical creatures.

-1 Deranged Hermit +1 Gaea's Herald
While Deranged Hermit is good for some token generation, I don't think he does that much else for you. It may synergy with Earthcraft but that's about it. I would remove him and replace him with Gaea's Herald just because that's more pressure you're putting on your opponents' to deal with you.

-1 Earthcraft +1 Ulamog, the Infinite Gyre While Earthcraft is a very good card, I don't think the price tag justifies having it in your deck, particularly for what it does. I think adding in the original Ulamog can do just as much, if not more than Earthcraft can for you.

Ghidorah, King of the Cosmos EDH

Daedalus19876 thanks for the suggestions. Actually, had considered Primal Surge when first building the deck. Might be time to look into trying it out.

As a mostly combo player, this deck has been refreshing to play because it really isn't going for combos, which is why I'm not (currently) running the Dockside/Sabertooth combo.

Dismiss Into Dreams is just a pet card of mine. Without support, its more a nuisance and a card that passively stops a lot of things. You are correct that it doesn't need to be in the deck.

I'm definitely going to test Fauna Shaman and Survival of the Fittest, Cold-Eyed Selkie, Primal Surge, and will probably cave on Dockside Extortionist eventually (my only one is tied up at the moment).

I'll add some ramp and add some other things to make this less a Timmy deck when I make any changes, as those changes will naturally increase the power of the deck, but I think I'll actually miss playing it as a Timmy deck.