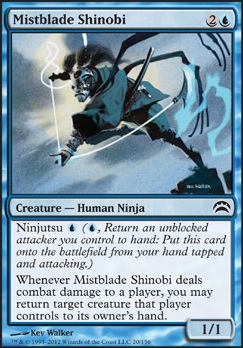 Ninjutsu _(, Return an unblocked attacker you control to hand: Put this card into play from your hand tapped and attacking.) _

Whenever Mistblade Shinobi deals combat damage to a player, you may return target creature that player controls to its owner's hand. 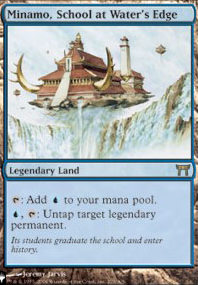 I haven't thought about that (but it sounds like an interesting idea!), but I have thought about the difficulty of playing Master of Cruelties . Usually you can get the kill at the earliest turn 6, that's a lot of time for things to go wrong.

But when the deck works, you have enough control to last that long. Especially if you get Mistblade Shinobi and Tetsuko Umezawa, Fugitive out.

Putting in more Alesha's and discard/mill cards would mean having to put in a lot of cards just to get Master out quicker. Not sure what to remove, but do you have any idea on what kind of cards to add for that to work?

I'm very excited about the upcoming Ninjas! I'm thinking of swapping out one or more Ninja of the Deep Hours for Ingenious Infiltrator . Mist-Syndicate Naga sounds a bit slow but I'd like to test it out, might be great with Higure, the Still Wind .

Kogarashi on When do ninjutsu effects trigger?

As a note, ninjutsu itself doesn't trigger. It's an activated ability. The requirements to be able to activate it are that you must have an attacking creature that hasn't been blocked. This means you can't activate ninjutsu until the declare blockers step, and you have through the end of combat step to do so, when your attackers are no longer officially attacking. However, as long as you have priority during any of those steps, you can activate ninjutsu, so you could use Quickling to bounce your blocked Mistblade Shinobi and then use the Mistblade's ninjutsu ability to swap it with Faerie Miscreant.

And as DragonKing90 said, while first strike can cause the combat phase to have two combat damage steps, the combat phase will only have one declare blockers step no matter what, so using ninjutsu will not reset that.