I know you are, but what am I? (extra combats) 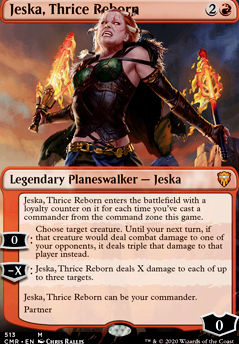 After binging Naruto Shippuden during covid it inspired me to build this deck. That and that it's not an overly done partner pairing. To those unfamiliar with the show, Naruto "Sakashima of a Thousand Faces" has blue "Chakra/energy" making shadow clones of himself while the sacred beast sealed inside him (Nine Tails,"Jeska, Thrice Reborn") has red chakra and gives him extra energy/chakra.

To stick to this theme the idea is simple, make copies of big creatures "Sacred Beasts" with strong abilities whose effects are additive when cloned (Or just good big creatures) such as Ilharg, the Raze-Boar,Terror of the Peaks, Scourge of the Throne, Hellkite Tyrant, Wurmcoil Engine, etc. as well as abilities that stack when cloned Wandering Archaic Â , card:Kairi, the Swirling Sky (NEO, or Moraug, Fury of Akoum. You can also copy your opponents creatures too, but in case they aren't running creature heavy decks this way there are always options available.

Power buffs Once you can get damage through put Jeska, Thrice Reborn out to deal triple damage. Even better if its your commander with the chance to one shot an opponent with commander damage. Many of the 'Sacred Beasts' are 6/6 creatures so as long as they can get +1 through equipment or other means they have the opportunity to hit for 21 damage in one shot (7/7 times triple damage). Copying Jeska, Thrice Reborn with Sakashima the Impostor or Spark Double also offers the chance to do 9X the amount of damage. Fiery Emancipation helps make creature damage a more viable strategy along with a handful of powerful artifact equipment. Seize the Day can win the game in some scenarios especially if your creature is dealing 3 times damage each combat. To help set up these strategies there is plenty of removal, draw, and counters to control the game until you're ready to attack all in.

Terror of the Peaks + Rite of Replication kicked leads to 5 additional 5/4 flyers that when their ETBs stack give you 75 damage (5+10+15+20+25) to deal out in increments of 5 to any target creature OR player. Then you get all the possible future ETBs to kill anyone who didnât die from the first hit.

Board wipes I'd argue that one of this decks biggest weaknesses is going against decks that go wide since this tends to play kind of like a volron deck. To compensate for this I run different board wipes alternating between blue and red. For blue I use Cyclonic Rift, Devastation Tide and for red i'm utilizing Blasphemous Act and Earthquake.

The deck is actually a lot of fun as it provides multiple strategies depending on what your opponents are playing.