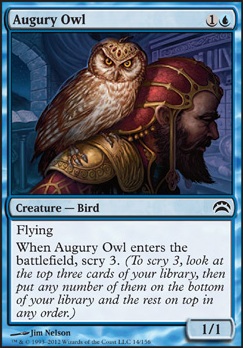 When Augury Owl enters the battlefield, scry 3. (To scry 3, look at the top three cards of your library, then put any number of them on the bottom of your library and the rest on top in any order.)

When Doves Scry
by potentiallygood

Augury Owl, Aether Tunnel, Mycosynth Wellspring, Resolute Archangel, Oreskos Explorer, Winds of Abandon i think that is what i would change