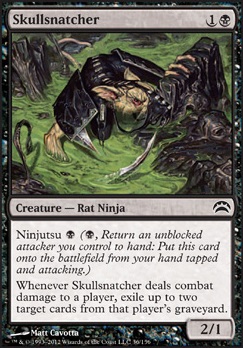 Ninjutsu (Black) ((Black), Return an unblocked attacker you control to hand: Put this card into play from your hand tapped and attacking.)

Whenever Skullsnatcher deals combat damage to a player, remove up to two target cards in that player's graveyard from the game.

Skullsnatcher occurrence in decks from the last year Could one attack with a Master or Cruelties and use a ninjitsu ability like the one on Skullsnatcher to kill an opponent? Given that the master is unblocked.

It seems to me that the master would trigger as the declare blockers step ends, which has to happen before Ninjutsu abilities can be used, potentially leaving the trigger on the stack.

Lab Rats is fun Culling the Weak is good one shot mana boost to get mr rat king out on T2 drop Wayfarer's Bauble for Expedition Map , why no Skullsnatcher he works well with graverober?

I've done a lot of changes to the original deck. Mostly shoring up the mana base which has improved the deck greatly, although the required cards were ridiculously expensive...

Several of the new Modern Horizon cards in, most of them have been great. Ingenious Infiltrator is really superior to Ninja of the Deep Hours, especially now that mana isn't as much of a problem anymore. A lot of value from ninjutsuing one in using a Changeling Outcast then casting the Changeling Outcast again. Fallen Shinobi is also great. Really depends on what kind of deck you're facing but against some opp you can turn the game around for just 4 CMC.

I've tried Moonblade Shinobi without being impressed. I haven't tried Mist-Syndicate Naga though I've aquired a playset. It might be a good card in combination with Tetsuko.

Most recent changes have been:

Siren Stormtamer in, Ornithopter out

Some removal replaced with Mana Leak

1 Dire Fleet Daredevil out, 1 Dreadbore in.

I'm also thinking about taking Creeping Tar Pit out. 3 CMC is simply too expensive for a ninjutsu enabler, I very rarely have use for it. Thinking about getting one or more Snapcaster Mage . They're obviously very good, but they'd need to be VERY good in this deck to justify the cost..

I really need to think about a good sideboard, I'd welcome any suggestions! I'm thinking a couple of simple graveyard hate cards like, along with Skullsnatcher . Walker of Secret Ways might be useful too. I have a lot of issues with go-wide decks so something like Ghostly Prison (but the right colors) would be awesome.

Why not Experiment One or Cloudfin Raptor? They do need other creatures to turn on, but they can pretty consistantly hit that 3 power boundary- I've seen them in similar zoo lists.

Blistercoil Weird and Nivmagus Elemental are less traditional but fairly effective options in spell heavy lists- especially since you've only got access to U/G turn 1 rather than U/R. Steppe Lynx are worth looking at- but supporting white mana then fetch is less than perfect in your list.

I've been running grave hate against KCI and storm, just to slow them down. Be it Dryad Militant or Faerie Macabre, Scavenging Ooze or Skullsnatcher. (ninjitsu on bloodbraid is disynergy if you hit it, but synergy if its in hand. Its an interesting mix.) Either way, there are a lot of options out there depending on what you want to hit off braid and what you want in your hand. Heck, you can support Jund Charm in this list.