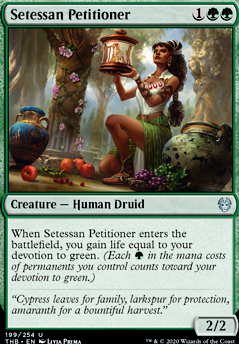 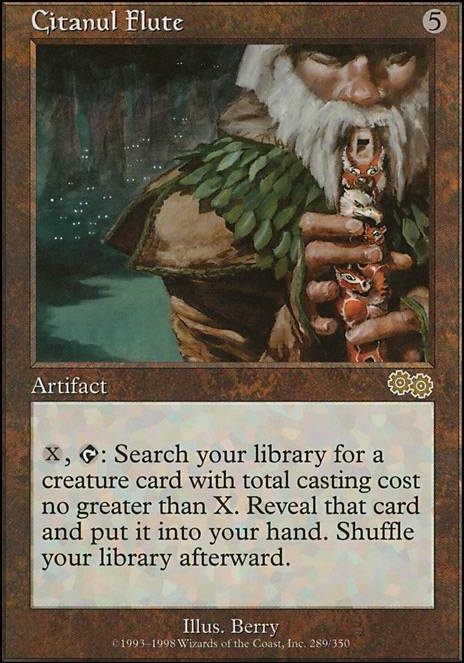 Shall we complete the pie then? This is not an old one, but it's a versatile and powerful mono green commander that could be budget friendly, it's Kogla, the Titan Ape !

This card just does so much. It removes creatures by etb, artifacts and enchantments by attacking, it has the convenient 7 power for 3 hits to be lethal commander damage, if you put enough humans in your deck, he's not easy to kill, and those humans can provide lots of synergy by being replayed after you bounced them. Notably Eternal Witness , or Hyrax Tower Scout + Karametra's Acolyte will work great, but also Champion of Lambholt , Foul Emissary , Mwonvuli Beast Tracker , Setessan Petitioner and Slippery Bogbonder can be incredibly useful to reuse over and over again.

Hey itsbuzzi thanks for the detailed response and heads up on Walking Ballista . I haven't played much in the last few years so wasn't aware. Definitely sad to lose that insta-win potential; any ideas for another card that could end the game immediately? Also much appreciated for making me aware that Setessan Petitioner exists lol.

I actually ran both Kruphix, God of Horizons and Hydra Broodmaster in a Standard Bant deck way back when, and it was a fun deck that did pretty well at tournaments, but it wasn't as good as the Simic deck in the deck description which is more similar to this deck. Kruphix was a little too slow tbh but I remember Broodmaster being pretty good so could be worth a look.

Hey, I ran a deck like this in standard, so a couple of things: 1) Walking Ballista is banned in pioneer, not sure why the site didn't flag your deck and

2) Swap out Nylea's Disciple for Setessan Petitioner . Costs one less for the same effect only a smaller creature, I've always wanted this card to be a little bit cheaper.

3) I used to run Setessan Tactics as my board wipe as getting the extra green to strive each time was not a hard thing to do at all, most of the time my entire board fights your board. I also ran Soul of New Phyrexia . I didn't have blue but was about to add it and put in Kruphix, God of Horizons . I had Nylea, God of the Hunt and Hydra Broodmaster . That guy was insane. I also used Karametra's Acolyte . Can't recall what else I had as this was years ago and I don't have the list. They added a ton of cards since then and Pioneer has a large card pool anyway. Good Luck

PhyrexianPreator, the problem with Reverent Hunter and Setessan Petitioner both have the same issue, they both rely on having a great boardstate. The format right now is creature-heavy so everyone main a bunch of removal, so relying on a boardstate is half the time a losing war, especially when humans is simply a better green stompy deck in every way. There's also the fact they both cost 3 mana and I simply don't have enough space for them. That's why I only play 2 Aspect of Hydra, they steal games but aren't good enough, especially when I main multiple creature with less than optimal devotion.

Yorvo, Lord of Garenbrig was on my mind but since the deck has few ways of getting card advantage, playing creatures after a 3 drop is most of time not the position you want to be; it also doesn't have any keyword or combat abilities so it's easily blocked. Playing a 1 drop and letting itself get bigger is safer than betting a complete turn on a threat easily countered.

These cards can probably pull up a good fight in a different build, with mana dork and planeswalker like Garruk, Primal Hunter in a more go-wide strategy, betting on a big late-ish game, even considering CoCo. But in a more mid-rangy/aggro they just ask too much of commitment. The deck has elements of devotion, but it isn't the main mechanic.

mahdik have you considered Reverent Hunter for the main and Setessan Petitioner for the side? Both benefit from all of the green symbols. Hunter becomes a large threat that can further grow experiment one and pelt collector. Petitioner is great for aggressive match-ups and can give you enough of an edge to win.

If you found stealleaf champion to not be effective may I suggest Yorvo, Lord of Garenbrig. He will only get bigger throughout the game and can get oout of hand rather quickly in this style of deck.

I had no idea that Lead the Stampede was about to come back into play for Pioneer - that definitely puts a spin on things. It leaves me re-considering the CoCo/Stampede approach once more which would naturally nudge out Beast Whisperer if I were to go that way.

Obviously Aspect of Hydra is killer and it was in every early iteration of this deck by default... but I discovered something, and this may only be my personal experience. I always seemed to either be holding them from the start where they were relatively dead draws or I got them late enough in the game that I already had the advantage and didn't need them. I've been experimenting without them, instead trying to use those slots for card draw or more creatures that fit the curve. The same thing always seems to happen with Walking Ballista for what its worth.

Lovestruck Beast is a funny card, but I just assumed that it would make a dangerous blocker if they somehow cleared the board of my dorks. Seems like it would work especially well with CoCo. Maybe just another beefy high-devotion 3-cost creature instead, like Leatherback Baloth?

I appreciate the recommendations about the sideboard. Honestly, I was just throwing stuff in there. Setessan Petitioner is definitely one of the cards that I was looking for and Pithing Needle is/should have been a no-brainer.