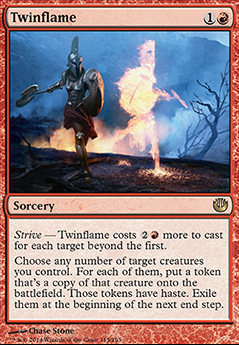 StriveÂ - Twinflame costs 2R more to cast for each target beyond the first.Â

Choose any number of target creatures you control. For each of them, put a token that's a copy of that creature onto the battlefield. Those tokens have haste. Exile them at the beginning of the next end step.

shadeslayerx22very interesting Anger I wanted to create a very offensive dek.What I love most is Kalonian Hydra + Twinflame

Dualcaster Mage is a personal pet card of mine. It's the best spell in each deck at the table. ;) It is a wincon with Twinflame and Heat Shimmer. With any of the flicker effects, it is infinite magecraft but I wouldn't say it's a wincon.

TerraBlaze I personally love running Dockside Extortionist, Kor Cartographer and Solemn Simulacrum with cards like Twinflame, Cloudshift, Ephemerate, and Eerie Interlude. To a lesser extent Graceful Reprieve. If you are doing something like this as a package of protection spells as well as additional targets then the idea of putting the recruiters in work pretty well.

Scytec on Izzet worth it?

Naru wouldn't give you the redundancy you want because it is legendary so the tokens will not be able to attack in the Twinflame combo. It does work in the other scenarios though, in your playtesting, do you have a hard time tutoring for or seeking out Dualcaster? I feel like that would be the deciding factor for me since it doesn't just work as an additional copy of Dualcaster in your deck. I think i would playtest with it and see if you can afford to lose another piece of ramp, or interaction without it hurting too bad. I definitely wouldnt remove Shimmer for it though.

Thanks for the suggestion Kalkris. I honestly hadn't considered that combo for this deck. I think after the Chain of Smog + Professor Onyx combo blew up, it fell off my radar. The endless spoiler seasons have also made it harder to keep track of everything lol.

The only combo I was considering adding so far was Dualcaster Mage + Twinflame; I figured Dualcaster could be a decent value piece for copying spells, regardless of the combo. After the couple of games I played this weekend, I have been kicking the idea around the back of my mind of a more spell-slinger dedicated Prosper list. At the very least, I'd like to add maybe one or two more pieces of instant speed interaction, perhaps Withering Boon

Absolutely love the primer that youâve written for your Inalla deck.

I wanted to mention a couple of all stars that Iâve found when Iâve been playing Inalla; the first is Trinket Mage which is incredibly versatile when you run all three of the artifact lands in the Grixis colours (Seat of the Synod, Vault of Whispers & Great Furnace). Some of the wizards in the deck can be quite tricky to cast with the coloured mana symbols in their costs but with Trinket Mage you can grab a land of the colour that youâre missing along with a Sol Ring. Another Trinket Mage target that Iâve been experimenting with is Skullclamp, as so many wizards only have one toughness they make great targets for the clamp and itâs even better when youâre clamping a token copy of the wizard as well.

The final card I wanted to mention is Twinflame which can be used as a win condition with Dualcaster Mage similar to the Ghostly Flicker combo except that Twinflame gives the token copy haste as well so you donât need to create a copy using the eminence trigger. The best part about using this combo is that Twinflame is searchable using Spellseeker and with the token copy of Spellseeker you can search for a tutor like Demonic Tutor/Diabolic Tutor that can then find your Dualcaster Mage allowing you to combo quickly if youâre playing against some powerful decks.