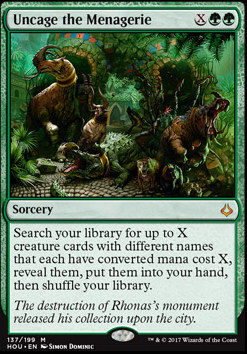 Search your library for up to X creature cards with different names that each have converted mana cost X, reveal them, put them into your hand, then shuffle your library.

Uncage the Menagerie occurrence in decks from the last year

seshiro_of_the_orochi Yeah your thought process is pretty similar to what I was running through in my head, though I hadn't considered the parallels between it and Uncage the Menagerie, despite the obvious resemblance. I'd prefer my card to be playable earlier in the game, though at the same time 5 mana for 9 cmc worth of creatures still feels insane. I guess the only thing that seems to compensate for that is that while you'd be getting more than your mana's worth in sheer volume of creatures, the amount of value per creature is never going to be too obscene; that in and of itself limits the card's potential for brokenness while still making it an incredible value play. Of course, in the context of most constructed formats, once you reach a certain point, an expensive enough card, at sorcery speed no less, isn't typically worth playing unless it practically wins the game for you on the spot (and even so may not see too much play depending on the current meta). At a lower cost it'd be similar to Collected Company, which isn't necessarily a bad thing.

TL;DR, I didn't want to create an EDH-exclusive card, so I think I'm gonna go with and add the clause that you can search your hand in addition to your library. I've put a lot of thought into this considering that it's a made-up Magic card made for a custom cards forum that's never actually going to be printed. Oh well.

channelfireball12345: Compare Uncage the Menagerie. It's GG, but it puts to hand. It's a terrible card basically. Your card should definitely be a mythic rare either way, but it basically depends on what you wish it to feel like. At XGG you could easily get out 16 mana worth of creatures by paying 6 mana. That's insane, while still being fine at X=1 or 2. At XGGG, it would still be insane in mid to late game, as paying 6 or 7 mana for four 4-drops doesn't make that much of a difference, but it would be a terrible card early. 4 mana for a 1-drop isn't desirable. To make it less versatile, going to XGGG or even XGGGG seems reasonable. 8 mana for four 4-drops is still pretty good. Compare Deathbellow War Cry.

One minor issue, Uncage the Menagerie doesn't get Walking Ballista. From a quick rules search, you can pay 0, but you won't be able to find any cards. I'd suggest either Brutalizer Exarch or Citanul Flute as replacements. Other that that, the deck seems great!

Hoobynobber7395 To be honest, since you're running mostly hydra creatures, Chord of Calling is bad. Yes it can get you some good creatures but the majority of your creatures enter with counters on them based off of the amount spent on X. If you used Chord of Calling to grab them, they would die when board state is checked. Uncage the Menagerie is strictly better as it puts them into your hand, although it has the downside of having to be a certain cmc. For Mind Grind, if you haven't already put it in, i would cut Shark Typhoon. It's costly on mana and only rewards you with one token. Imo, not worth it. I'd also like to mention Gelatinous Genesis. A personal favorite of mine! So much value off this card. Take these suggestions as you will. If you need any help, mention me here amd i'll do my best to do so.

Paeldroth, that was my feeling on Chord of Calling too. The downside of Uncage the Menagerie is how specific you need to be on the casting cost, as it will get you up to 2x 2cmc's, 3x 3cmc's etc. I think here the most likely use is either to get Seedborn Muse or Bloom Tender and another hydra.

Hadana's Climb Â Flip - Enchantment that will flip into a land almost immediately in most cases. Then it's another way to give your dudes a big boost plus evasion...

The more I look at the deck, the more I feel this has a huge sliding scale. One one end there is hydra tribal and X-spells without too much silly stuff. The other end is infinite mana combos and some brutal finishers. I think finding the right point on that scale will be an important factor when building the deck for your own meta.

Bloodsucker1211, That pretty much makes Doubling Season and Primal Vigor auto includes! Not sure about Parallell lives as an auto, might actually need some play data.