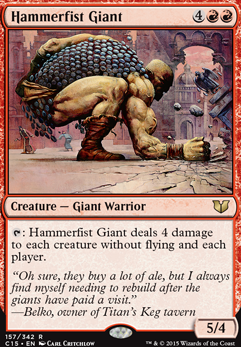 : Hammerfist Giant deals 4 damage to each creature without flying and each player. 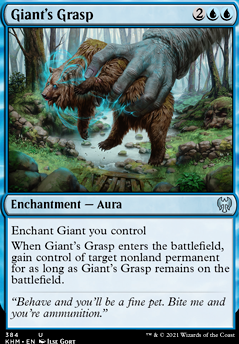 Quickest Way to the Other Side is Through Baby
by manofsteele420 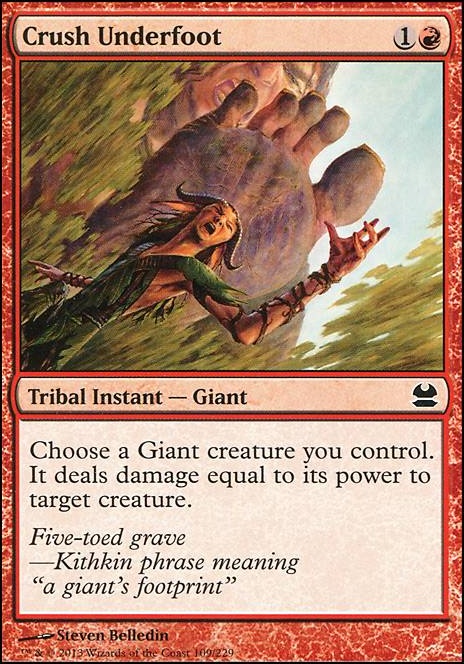 The main way to up the power and resiliency of a deck is to increase the draw/ramp/removal packages, you're going to want 10 each of those categories.

As far as counterspells go that won't be wasted on a cascade: You Find the Villains' Lair, Mystic Confluence, and Supreme Will are all modal, with some fun other options.

I would say the main thing this deck needs is more interaction with its opponents. You may see a Narset, Enlightened Master on the other side of the table from you, and have no way to deal with it. Yikes! A boardwipe or two will do you good, whether it be a Burn Down the House or a Hammerfist Giant.

First off I love the build, and aside from what has been mentioned above I only have a couple of suggestions. One, is a personal favorite of mine, Pristine Angel she has protection from everything and is hard to target. The other is Basilisk Collar, all your angels have lifelink why not give one deathtoch. If that doesn't work you can always attach Lightning Greaves to Heavenly Blademaster then put Basilisk Collar on Hammerfist Giant and wipe the board at will. Maybe not a great suggestion but it seems fun.

I think Iona, Shield of Emeria you should consider to put at least in the sideboard. She completely shuts down mono-color decks. I don't know how your playgroup is, but if there are several mono-color players in it, you should definitly put her. Even against decks with 2 or 3 colors she is already a pain. Also speaking about mana, Serra Angel is not much worth the slot imo, for her mana cost she is just an angel with vigilance and flying, I'd rather put in her place another creature with something more impactful, like the suggestions I gave previously that do something as soon as they enter, and can affect the board in a big way, while she simply doesn't untap to attack. It was a great card once, now compared with what we have it's not a big deal.

Hammerfist Giant is also a bit expensive in mana but he fits well in the deck, he is also basicly a boardwipe, when Gisela is in play of course, that you can do once per turn. Plus even if Gisela isn't in play most of your creatures can survive it.

I think Berserkers' Onslaught is also worth considering, double strike plus double damage from Gisela, you can almost one-shot someone. True Conviction aswell, it's basicly the same thing but for 1 more mana it also gives lifelink.

I don't know where I put the other cards tho. When I was building my Gisela deck (ended up not finishing it), I had all the cards together but then I put them somewhere else and I can't find them. But I guess the suggestions I gave you for now might help. Good luck. :)