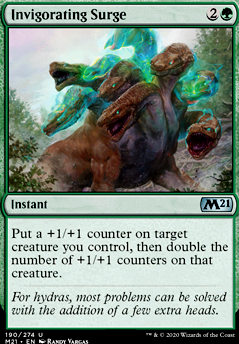 Invigorating Surge occurrence in decks from the last year

Double or Nothing
by Tyughjbnm89

multiply by zero
by KingOfDoma

What, no Invigorating Surge?

Lol, awesome deck. Wish I had thought of it myself.

Invigorating Surge, Solidarity of Heroes, Hardened Scales and Branching Evolution may help to make the dog fat and happy; The Ozolith keeps him staying fat even if he's removed and Ancient Animus - is a very overlooked removal spell.