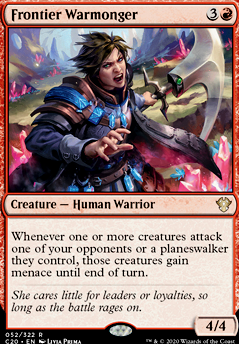 Whenever one or more creatures attack one of your opponents or a planeswalker they control, those creatures gain menace until end of turn.

Frontier Warmonger occurrence in decks from the last year

Wanna attack me? Not this turn
by Mick-Tis

The Queen is Dead, Long Live the Queen
by Angry_Potatoes

Nothing from ZNR/ZNC caught my eye for this deck because e.g. none of the spell/land DFMCs interest me and the deck can't consistently trigger landfall either. The recent printings of Agitator Ant & Frontier Warmonger do make me optimistic for the deck's growth though, even if it'll never qualify for cEDH.

If you're really wondering if there's any way to improve the deck, I could see replacing any number of Token Gifting cards with more evasive creatures in order to make things more consistent, but that's taking a knife to the soul of the deck.

I think Flawless Maneuver will end up being less useful than Teferi's protection and Boros Charm.

Agitator Ant, Frontier Warmonger, and Ruinous Ultimatum also seem fun but I don't think they will ultimately be good enough to keep in my list long term unless I like them enough to make the conscious decision to keep them over something that would be objectively better.