Kruphix, God of Horizons
by Colinammm 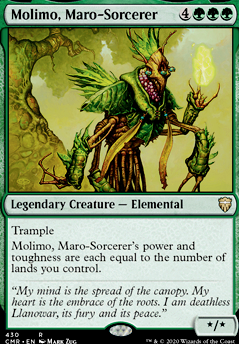 Have you considered Bramblecrush instead of Reclaiming Vines ?

I have replaced Bramblecrush with Mortality Spear , because the latter card is an instant, and destroying a creature is usually better than destroying a land. This deck has no lifegain to reduce the cost of the spell, but both cards cost 4 mana, so that is not a major issue.

I have replaced Bramblecrush with Excavation Technique , because the latter card has a more lenient mana cost, it is usually better to be able to destroy a troublesome creature than a troublesome land, and the demonstrate ability can be used to gain favors with other players, which is a major strategy of this deck.

I do like some of the new cards in Commander 2021, but I am very displeased that nearly every reprinted card in that set has already been reprinted, before, and that no cards in the older border are being updated to the new border, thus far.

Monologue tax is less powerful than is Smothering Tithe , but it shall be great to have that redundancy.

Archaeomancer's map is an example of how card advantage works in white, and I am glad that WotC printed that card.

Veryan, voice of duality will be awesome for the Elsha of the Infinite

deck that I am building, but, with so many awesome cards in this set, I worry that I will not be able to put every one of them in that deck.