Storm's Wrath deals 4 damage to each creature and each planeswalker.

Storm's Wrath occurrence in decks from the last year

Wait, what if I could cast a while I cast a spell
by SynFenix

Oops, I Became an Eldrazi
by klaudiohmm 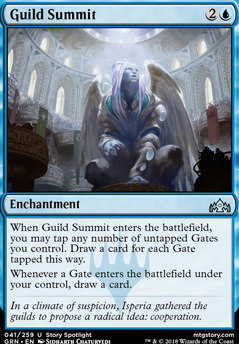 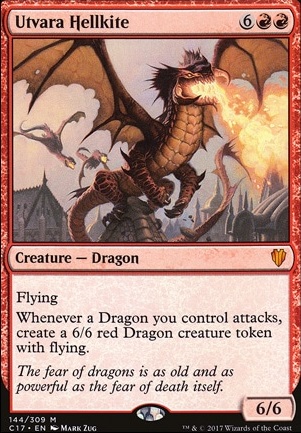 Leyline Tyrant can work here. Just tap all your red mana sources at the end of each of your opponent's turns and you build up mana quite quickly.

I don't feel like Expressive Iteration is doing its best work here. It really works best when you can find something you can cast that turn with it, instead of in a deck with a bunch of big spells. I feel like you need more early things or more controlling things to last you through the early game. Storm's Wrath would do that, as would like Brazen Borrower to slow down your opponents.

Cinderheart Giant is not really a good card. It's too expensive for its effect, even if it does die. Toralf, God of Fury Â Flip doesn't do too much either. I'd advise you to look at other giants lists to see what giants are good. Aegar, the Freezing Flame , Invasion of the Giants , the full playset of Calamity Bearer s, are all pretty much must-haves.

Embercleave isn't really what you want. You're going tall, not wide, and EC does its best work when you go wide.

For the control package, Saw It Coming >> any counterspell you have atm. You'll also want sweepers for go-wide decks like mono-red, so Storm's Wrath should be here, or at least Shatterskull Smashing Â Flip. Probably both. Actually, Battle of Frost and Fire is better than Storm's Wrath, since you're in giants and it has additional upside after the sweep.

Shimmerdrift Vale isn't worth having. Basics would be better.

I'm not really sure how having a lot of X/1 creatures in a Kaervek deck is good synergy. I honestly love Clackbridge Troll and I'd love for there to be a semi-good deck where he's played, so I'll try and help out here.

The ideal situation is of course to have a T4 Clackbridge and T5 Kaervek. There should be some kind of redundancy to make this combo easier and get rid of some slightly larger creatures your opponent has. Crippling Fear will help there, and if you go into another color like red, you can have Storm's Wrath or other sweepers. Sadly, Massacre Girl is no longer in the format.

I'm not really sure what else synergizes with a card like Clackbridge Troll, and this deck doesn't really have an identity outside of it. You could turn it into Rakdos Midrange, perhaps, or Golgari bigstuffs, but there are just not enough good cards that fit into this deck at the moment.

Aikido of the Inward Eye

Seems very gimmick, the combo is a 4 card combo. You either need 1) ways to ensure you get the combo, by drawing and searching the deck and 2) to ensure you don't lose before you get the combo. Facing an aggressive deck you may not want to trade off a creature you control with an attacker because that creature is needed for the combo. Brash Taunter wouldn't die, but you'd need to survive to turn 5 just to cast it. Maybe run some card draw (Boros is notorious for not having card draw) but maybe Showdown of the Skalds could help you get your combo, but you'd still need to survive by then and have the mana to cast all of it. Maybe go with some sort of treasure token generation theme so you can have the mana earlier. Also Deafening Clarion can help in the early game by wiping the board and give lifelink to whomever on your side survives. You could also look into token creatures, Boros has tons of that then cast Transmogrify to drop an Aikido creature. There are other effects that do this I think there is a Lukka planeswalker that does it as well.

You could also look into the route of just board wiping with an Aikido card out. It appears as though you are trying to cast a cheap Storm's Wrath but maybe just go Star of Extinction with a Boros Reckoner out and win? It's a 2 card combo, not 3 so easier to pull off you just have to get to 7 lands (which is only 1 more than your infinite combo) You don't actually need infinite, just enough to win.

Also Arid Mesa and Rugged Prairie appear as legal on Tappedout but neither is legal. Pioneer Lands Data Base is a great place to check it appears updated for all lands legal in the format.

I for one have my hopes for prismari command and would love to see grixis do good things with it (what you said sounds pretty good to me)....the only other countermagic i highly recommend to people that you didnt mention is good ol' Mana Leak ... much like Condescend its super generic/mana base friendly and is an allstar early-mid game.... a newer sweeper that I came across while playing MTGA is Storm's Wrath ... the fact that it catches walkers too seems like it could be pretty good?... never thought of silumgar as an option but honestly that seems pretty legit!

Cruel Ultimatum is definitely too slow for Modern in any competitive environment.... Unless the meta became Naya Zoo for some reason and Grixis control could just do whatever it wanted... I just Run Ultimatum because its Cruel Edict + Three Tragedies + Lava Axe + Raise Dead + Concentrate + Soothing Balm + Exile opponents soul.... It's my favorite card and got the playmat to match ;)

I was just wondering why when I looked into what SERIOUS Grixis control looks like nowadays it hasn't topped any events in so many years... That kinda bugs/concerns me way more that Ultimatum being obsoleted.... unfortunatly it just sounds like + splash whatever other color is just a case of "anything grixis can do I can do better" from the sounds of this thread.... oh well maybe someday Grixis Control will get what it needs to be a presence in the competitive landscape.

Thud, Act of Treason, and Storm's Wrath are all good

I like your deck! Wrath tribal is like a salt lick for tears. If you ever wanna diversify your tactics, you can include a few more damage-sweepers, like Storm's Wrath, and add Stuffy Doll, Brash Taunter, and Stormwild Capridor. Even without the damage sweepers, the indestructibility of Taunter and the Doll could slot nicely into your build.

Gads, but I love a Boros wrath build. Cheers!