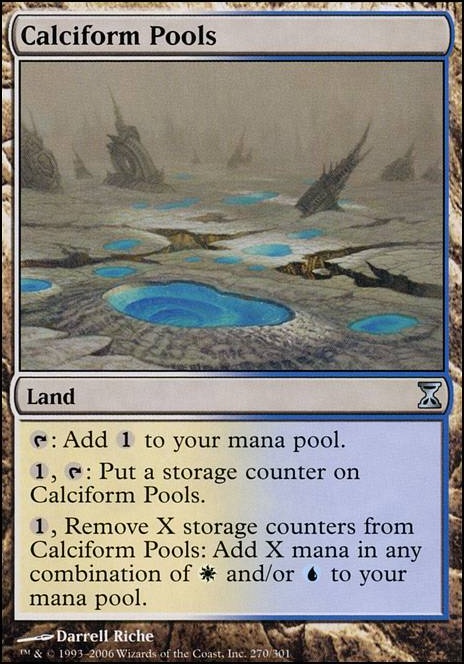 (1), Remove X storage counters from Calciform Pools: Add X mana in any combination of (White) and/or (Blue) to your mana pool.

Calciform Pools occurrence in decks from the last year

Army of the Saints | Geist of Saint Traft EDH
by Darkshadow327

So I recently put Calciform Pools, Dreadship Reef, and Saltcrusted Steppe in my deck. Regrettably I haven't had a chance to see them in play yet. I've had Mirrodin's Core out and it was working great so I figured why not 3 more storage lands. Whats your take on this?

ebonyks your deck look great, when I've started this deck I want to make a stax deck but I found out it was more fun mixing all the planeswalker and discovering new interaction between all of them. I need to be honest, Jace, Cunning Castaway seem better than I think.

ebonyks your deck look great, when I've started this deck I want to make a stax deck but I found out it was more fun mixing all the planeswalker and discovering new interaction between all of them. I need to be honest, Jace, Cunning Castaway seem better than I think.

In my Atraxa EDH deck, I currently have four "storage lands:" Saltcrusted Steppe , Dreadship Reef , Calciform Pools , and Mage-Ring Network , because they have great synergy with such a deck.

However, I really want to put a Gavony Township in that deck, so I am contemplating removing the Mage-Ring Network , since a land that can produce only colorless mana may not be the best option for a four-colored deck, but I wish to ask the advice of other users here, before I make a decision. Ironically, that deck did have the township, originally, but I removed it in favor of Karn's Bastion .

What does everyone else say about this? Between Mage-Ring Network and Gavony Township , which is the better card for my deck?

DemonDragonJ on Storage Lands in an Atraxa ...

I have an EDH deck with Atraxa as its general, and that deck has all four triple lands that are supported in her colors ( Arcane Sanctum , Sandsteppe Citadel , Seaside Citadel , and Opulent Palace ), which are great lands, but they enter the battlefield tapped, so I am seeking replacements for them.

I cannot believe that I did not consider the âstorage lands,â the lands that use storage counters, when I was building the deck, as they would be absolutely perfect for a deck that focuses on the proliferate mechanic, but I wish to seek advice from the other users on this forum before I put those lands in my deck.

The storage lands that I am considering for my deck are Calciform Pools , Dreadship Reef , Saltcrusted Steppe , and Mage-Ring Network . What does everyone else say about this? Are those lands good for an Atraxa EDH deck?

Iâll second Talisman, and Calciform Pools is one I use to get a T4 Isperia. Myriad Landscape does the same.

This added in fancy lands that were gathering dust. But as far as actually modifying the deck, I essentially cut the polymorph package for a heavier enchantress package. New synergies include:
- Words of Worship + Lich's Mastery
- Auratog + Rancor + Enchantress's Presence
- Parallax Wave + Opalescence
- Punishing Fire + Grove of the Burnwillows

Generally, I would rank the mana lands lands into a couple different tiers (within these tiers there might be some striation--this is just a general overview).

At the top are your original Duals, like Tundra for obvious reasons. They enter untapped, they can be fetched, and they have no downside other than being nonbasic lands.

The second tier are your shock lands, like Hallowed Fountain . These can be fetched and have the option of entering untapped, though there is a slight downside. The downside, however, is mitigated some by the fact it only has to be paid once.

The next tier are the lands that enter untapped but have a downside or other restriction to use. These include your filter lands ( Skycloud Expanse , Mystic Gate ), check lands ( Glacial Fortress ); pain lands ( Adarkar Wastes ); etc.

There are a couple lands that enter untapped that I would not include in this tier, such as mana batteries ( Calciform Pools ) or lands that have restrictions on their being untapped ( Thalakos Lowlands ; Land Cap ; etc.).

Finally we get to lands that enter tapped. If you are on a restrictive budget, you can use these, but you are going to have significant problems with hitting your curve. Ideally, everyone in your meta will have a similar mana base, as otherwise you will be perpetually a turn behind in terms of mana generation.

The tri-lands would fall into this lowest tier. While having three colours is nice, they are still too slow for all but the most casual of tables. There are plenty of decent rainbow options, such as Mana Confluence , that would be a preferable choice.