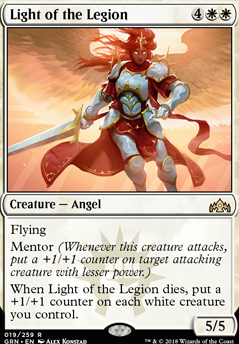 Light of the Legion

When Light of the Legion dies, put a +1/+1 counter on each white creature you control.

Light of the Legion occurrence in decks from the last year 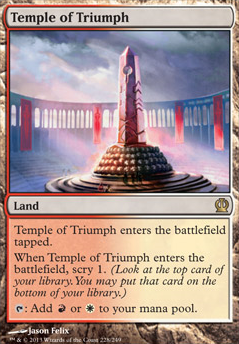 Light of the Legion Discussion

Get rid of Light of the Legion And put in two More Lyra Dawnbringer she's too good and Legion is not!

She's a anthem effect. You most likely won't even have to attack with her. You'll win with the 16+ life swing you should have by turn 5

The cuts I suggested to Stone:

And my suggested additions:

Just suggestions as always. The curve is waaayyy too shallow to be consistent.

I agree with you CaptainBanana42

another suggestion is using Light of the Legion to boost other creatures and Benalish Marshal to give all creatures an extra push.

how about Entreat the Angels or Light of the Legion ?

Thank you for the suggestions! Iona we're specifically avoiding due to the no-fun factor associated with it. Also because I play, among my decks, mono-black, mono-red, and mono-green, lol. For the same reason we've avoided Linvala.

Luminarch Ascension we've considered before, however if you don't get it out early, many decks can make it so you never get to four counters.

Ghostly Prison/Authority of the Consuls/Blind Obedience are interesting includes, though I'd doubt we'd put more than one of the three in. As ways to slow down opponents, I think I favor Authority as it comes down the earliest and is the least intrusive, keeping us from being marked as a threat early on.

As for Adarkar Valkyrie, I personally think it's fantastic, but he thinks he has enough recursion already. I'm trying to convince him that since he has snow synergies he should put it in, but we'll see.

I should mention we just replaced Avacyn, Guardian Angel and Light of the Legion since the Avacyn never felt good to play. The Light is still in testing, but it seems like a good support for the combat-oriented strategy we've got going on.

Lifeline is cool, I've never seen that before

Totally forgot about Razaketh and Sheoldred. I feel stupid now.

Bontu's will definitely do work

Teferi's Protection has been in and then cut more times then I can count, it is definitely staying this time though.

I've been considering Smothering Abomination , it would be good.

Toxic Deluge is a good one, forgot about it too.

I really appreciate this! I'm sorry if it seems like I'm not accepting suggestions/criticism, I just like to provide explanations.