Rielle, the Everwise gets +1/+0 for each instant and sorcery card in your graveyard.

Whenever you discard one or more cards for the first time each turn, draw that many cards. 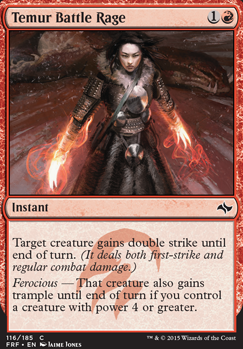 Who's hand is it anyway?
by Asinclair85

Rielle, the Everwise? Also, add some removal and counterspells.

In hindsight I wish Immolating Gyre took a page out of the Guilds of Ravnica Izzet cards' playbook and counted spell cards you own in exile as well. With the exception of maybe Rielle, the Everwise, pretty much all -inclusive spellslinger commanders wants to be able to use flashback-esque effects, so there's some awkwardness here that's IMO unwarranted; when you got a CMC 6 card that both requires setup and a certain deckbuilding criteria, I think we can cut it some slack.

List looks really refined, not exactly sure what I would cut for Unsubstantiate!

Looking at it I'm kinda thinking Rielle, the Everwise since Vadrok can't mutate onto her and seems really niche. Underworld Breach is also a possibility in my mind. To me it makes more sense to try and keep as much stuff in the grave as possibly for Vadrok, but I can also see how it could be extremely useful. I'm really grasping at straws here though, I have no idea.

These are really just pet cards of mine, but I could see them being effective here: Ral, Storm Conduit and Niv-Mizzet, Parun. These seem like they could be fun and a good payoff for Thousand-Year copying in the case of Ral and all the card draw in the case of Niv. Your deck already runs cards that are probably better, so I completely understand if you don't want to run them.

Anyway, just my 2 cents. Wasn't really sure what to say because the deck was so good already!

Seems like a really cool deck, first card that comes to mind when seeing your list are Fists of Flame and Windfall. Fists of flame can help you finish off opponents and even more abuse with her mechanic. Windfall is just good and is not too bad for a budget wheel which is Rielle, the Everwise favorite kind of cards. Overall sweet list really like seeing Rielle from a different angle. +1