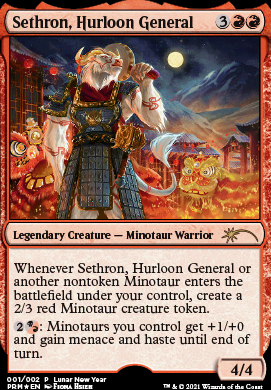 The only sound worse than a furious "moo" in the darkness is the silence afterwards.

I have been a fan of minotaurs ever since I opened a Rageblood Shaman in original Theros back in 2013. Not long after, I made a minotaur tribal deck, which was decent enough. The next natural step seemed to be to make a commander deck starring the raging bovines, however there were no good legendary minotaur to put at the helm. Enter Amonkhet, which gave us Neheb, the Worthy. For a long time, he was the only rakdos coloured commander we had to work with. I would rather play Neheb, the Eternal, but as he isn't RB, I couldn't without shaving half the deck.

EDIT: But in the year of 2020, Wizards graced us with a new RB Minotaur tribal commander in the form of Sethron, Hurloon General. I haven't been that stoked for a card reveal in a long time. Anyways, Sethron is everything we could ever want in a minotaur tribal deck: he makes additional minotaurs whenever we play our minotaurs, and as if that wasn't enough, he also pumps all our minotaurs' stats and give them two much coveted abilities in Menace and Haste. Welcome, Sethron, to the herd!

The creation of this deck was inspired by the printing of Deathbellow War Cry, which gives minotaurs a double Tooth and Nail for one less mana, which is crazy good. Of course, minotaurs aren't the best of tribes, although they've recieved some good lords in later years. That being said, there are a handful of really good minotaurs, and they will have to do some heavy lifting in this deck. Among them is an infinite mana combo, which I will describe further down.

The point of this deck is simple: summon cow and bull alike to gore your opponents like they were some freshly skewered shish kebab on a hot summer day. Despite the unimpressive statline on a lot of our minotaurs, we have quite a few lords that provide relevant abilities. Neheb, the Worthy, for example, gives all our minotaurs first strike, which is useful for pushing damage through blocks that would otherwise be trades. If we add Felhide Petrifier to the mix, we suddenly have a board of minotaurs that are incredibly hard to block. Ragemonger is quite special in the way that it reduces the cost of our minotaurs by colored mana instead of generic mana. It makes prime lords, such as Neheb, the Worthy and Kragma Warcaller stupidly cheap.

We have some interesting options in terms of support, like Didgeridoo and the aforementioned Deathbellow War Cry, and I think it's on the back of these cards that minotaur tribal may rise to become something unique in a format that otherwise lets people do whatever they want.

On the topic of Didgeridoo, I want to specify just what this card does:

This combo involves Neheb, the Eternal and Aggravated Assault. Assuming your opponents have lost at least 5 life this turn, you can spend 5 mana to create an extra combat step, which in turn creates an additional postcombat main phase where Neheb, the Eternal gives us mana. You don't even need to attack in the extra combat steps, just pass to your postcombat main phase to regain the mana. The mana disappears between phases, though, so your shenanigans will only truly work if you're able to continuously damage your opponents. If you do, you wil gradually gain more mana from Neheb, the Eternal. Infinite mana lets ut murder everyone with Zealot of the God-Pharaoh, which is a potential line of victory in this deck.