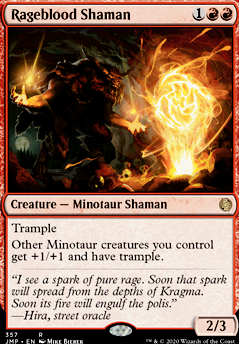 Other Minotaur creatures you control get +1/+1 and have trample.

Moooove Over Modern
by TijuanaBachelorParty

Wendithewendigo, as the cost is a one-time deal at the beginning of the upkeep, I think it's better to cast them. If it were am activated tap ability, sure because then you are "casting" it by paying an activation cost.

By doing it this way, you get to use him twice per turn (once at the beginning of both upkeeps), which has the benefit of:

hungry000 on converting an old deck into â¦