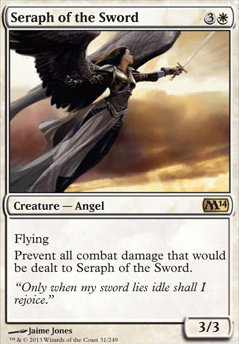 Seraph of the Sword

Prevent all combat damage that would be dealt to Seraph of the Sword.

Throw the birds
by HorseDemonJoe

Seraph of the Sword Discussion

Everdawn Champion and Seraph of the Sword seem like perfect blockers. Other cards like Hundred-Handed One and Watcher in the Web . Also theres cards like High Ground and Brave the Sands help out big time as well. Someone mentioned Stuffy Doll I think that's a great one. Someone mentioned Guardian of the Gateless that card and all the cards that allow you to block multiple creatures go great with Godsend . Theres so many great blockers. Someone mentioned Ophiomancer , that's a fantastic suggestion.

Kogarashi on Weathered Bodyguards, Seraph of the â¦

So you can choose to send that 10 unblocked damage to either Weathered Bodyguards or Seraph of the Sword , as you see fit.

If your opponent attacks with something with trample, though, and you do block it but some damage still gets through, you wouldn't be able to send that to Weathered Bodyguards and would have to send it at your Seraph of the Sword .

bj_bancroft on Weathered Bodyguards, Seraph of the â¦

If I have Weathered Bodyguards and Seraph of the Sword enchanted with Pariah in play and I let through 10 combat damage, do both creatures get dealt 10 damage, do I get to choose which is dealt the damage, or does something else happen?