: Seraph of the scales gains vigilance until end of turn.

Seraph of the Scales gains deathtouch until end of turn.

Afterlife 2 (When this creature is put into the graveyard from the battlefield, create two 1/1 white and black Spirit creature tokens with flying.)

I do love a good lifegain deck : ) The one I built a while back is a variation of 60 card soul sisters with Soul Warden and Soul's Attendant gaining me life from Lingering Souls or afterlife creatures like Seraph of the Scales or Orzhov Enforcer all to power up a Bloodthirsty Aerialist

Revival / Revenge is a great versatile card, and my favorite lifegain combo is to use Selenia, Dark Angel with Sanguine Bond and Tainted Sigil Selenia is a great flying blocker that your opponent will never actually get rid of, bond is bond : ) and sigil can actually save you in a pinch, but when you put them all together, it's a kill one player combo. Stacking Selenia triggers can be fun when it works : )

But again, I use this in 60 card, so not sure how applicable it is to commander. I also really like Ivory Tower or Sun Droplet just for constant gain effects for Bloodthirsty Aerialist but I'm not sure if it would work in EDH.

Best of luck with the deck! Looks pretty awesome.

I have not tried Seraph of the Scales at all, but then I also do not think I have specifically played this against any sort of reanimator. When I did play it, they had not really caught on at my LGS and lately I have been back on Grixis Control.

Anyway...I do not know what it is that I would pull out of the 4 slot for that as opposed to hanging on to a Path to Exile or Vindicate might end up being better than replacing anything in that slot, just my thoughts though. I was also considering a Kaya, Orzhov Usurper or two in the side since the reanimator decks have caught on.

Coming up, I am thinking about trying Markov Purifier for some card draw as a two of. Gaining life here is really easy, but unsure how bad that extra mana might be in the long run, but I figure it is worth a shot.

What do you think about running Seraph of the Scales ? Deathtouch seems quite good against Murktide Regent or Archon of Cruelty and you still have 2x 1/1 Blockers left after it dies.
For your Maybeboard: Night's Whisper seems like a better Sign in Blood to me in this deck since it's easier to cast.
Also a single Kaya, Orzhov Usurper in the sideboard seems nice in the current Meta: "+1" against Living End and other Graveyard strategies and "-1" against Ragavan, Nimble Pilferer and Dragon's Rage Channeler.

janederscore. Resplendent is worth totally the price. If I were you I would pick 2 and later when I can afford it (and I see how good it is)I'll invest in another 2. Bear in mind that with your new build you can reliably activate it in turn 3 via few different plays:

And so many ways of activating Resplendent on T4 than I am not even going to give you examples, xD.

And all of those plays leave to scenarios where you would be triggering her for every angel that ETBs and you would have both Speaker of the Heavens and Righteous Valkyrie online T4. The best scenarios you can hope for in your deck. It's rare but you can even get T4 wins out of that.

I haven't tried Seraph of the Scales it can be good. You clearly care about letting things behind when things die, so it fits that quite well, xD. I was going to suggest you Archangel of Tithes but I am seeing that its like 20 bucks in USD (wtf, its about 5 in here...) so forget about it, haha.

I haven't played the great hall so I don't know, modern is very fast so tapped lands are a no no for my liking. In the other hand you play 24 lands so a land that like Emeria's Call Â Flip is somewhat a "spell" is a good thing, I wish you could activate it not only as a sorcery though...maybe only 1 copy since it gives you only black mana, which only 1 card in your deck requires, so 90% its basically a colorless land? I don't know what to thing about the card, I suppose that's what playtesting is for, xD.

darkmus, yeah I've been going back and forth in my head about Resplendent Angel , but I do agree that its probably worth the price of admission to have a card that efficient in play.

I do think I'll probably swap in Legion Angel , I guess I'm just a bit anxious about how efficient removal is in modern compared to standard haha. It does make more sense to run generally than 4 Serra Avenger .

Ideally I think I'm going to keep this in B/W if for no other reason than to keep the identity of the deck in-tact (and so when I'm playing super casually I can slip in some of my favorite black valkyries just for fun). I think hitting about $200 usd is the spot I'd like this deck to sit in, that's about the max I'd be willing to shell out for this sort of thing and right now this is hovering right around that point.

I'm thinking about adding a couple Seraph of the Scales for the additional token payout, and I am definitely going to add 2 Great Hall of Starnheim ; both because its a cheap land, and because in my experience having the token conversion is actually extremely useful (and, with Resplendent Angel and one other lifegain source in play, its a 2-for-1 deal).

I definitely think I'll have a lot of fun with this when I get it put together, and thank you again for the help!

Out: Mausoleum Guard and Seraph of the Scales 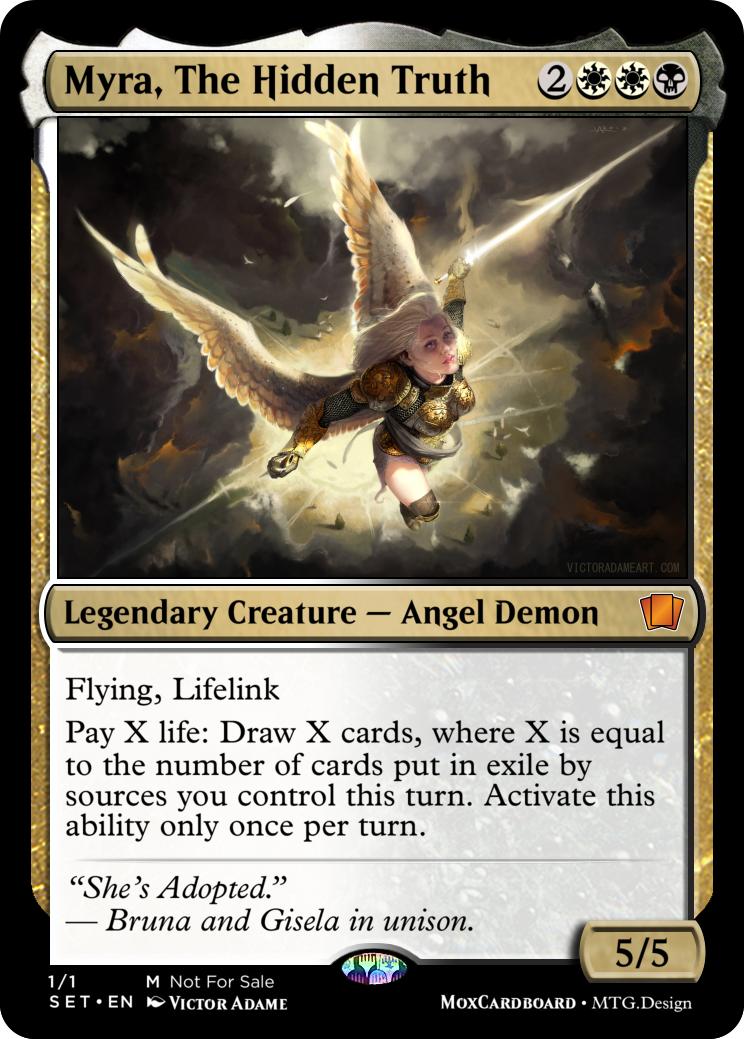