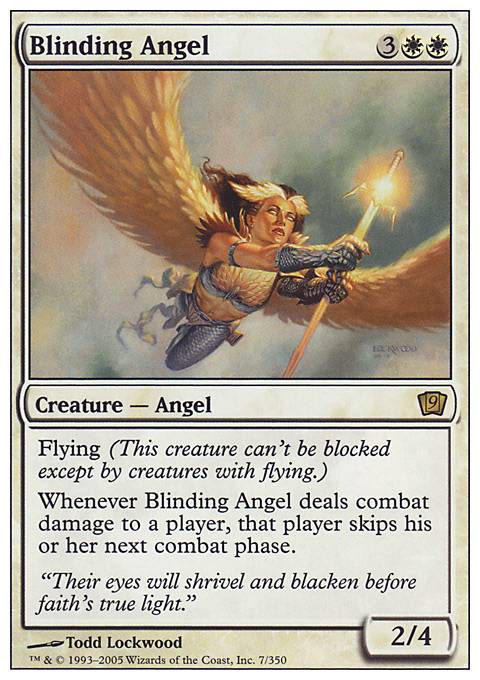 Whenever Blinding Angel deals combat damage to a player, that player skips his or her next combat phase.

The Church of Serra - Incense and Iron
by LunchBox1211

I love it! Angels are my favorite tribe, tribal is my favorite strategy, and I've wanted to see Shalai in a deck for some time (I mostly go mono-white, or boros). Not sure what you play against, but I would recomend running Reya Dawnbringer for reanimation. Also, Blinding Angel can be a pain for combat-centered decks.

Â Â Â Â Â n3mo17: I actually just cut All That Glitters, but if I find I'm needing a little more closing power it may get added back in. :)

Â Â Â Â Â Epicurus: Awesome suggestions! I too remember the days of getting slammed by Radiant, Archangel and being unable to respond due to Blinding Angel haha! Great list of suggestions, some of which will definitely hit the maybeboard. I had two Moats when I was a kid; definitely wouldn't of traded them if I had've known.. xD

I've got some suggestions for you that will hopefully help you out..

Blinding Angel - Can help stall decks that are highly aggro if she hits.

Grand Abolisher - Keeps you safe from having your stuff countered on your turn.

Beacon of Immortality - To help out with your two win cons.

Hall of the Bandit Lord - Haste in mono white?!

hmm description is very confusing, but it's a kaalia deck so I got lead to here.

I'm going to guess the deck is kinda budget focused and an angel tribal and will try to suggest cards along those lines (though really the best thing to do for this deck would be to upgrade the land base).

Blinding Angel can allow you to lock out a creature based opponent from getting combat steps.

Angel of Despair is removal on a winged stick, so is Angel of Serenity who also can work as a Gravedigger.

Boros Charm has quite a few functions, you can save your creatures from removal, turn your Armageddon into a one sided mass land destruction, or could give say a Gisela, Blade of Goldnight (also suggest, big dmg while also being good protection) double strike resulting in a 20 dmg swing (or more).

Cover of Darkness is an avoidance giving enchantment I've considered in the past with my Heavenly Rakdos back when I didn't have as many ways to give kaalia avoidance. In this heavier one tribe version you may see a lot more mileage out of it.

it seems you have a heavy indestructible focus on your angelic army, General's Regalia can help them protect you.