Orcus, Prince of Undeath
by Doom1995

god of death
by witchdoctor343 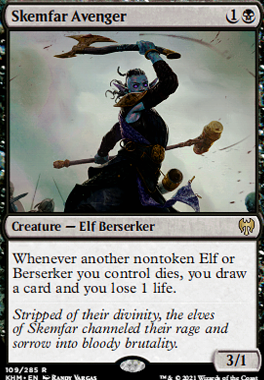 Ascarmillion on i need suggestions for a â¦

So in the new expansion i saw 2 cards that peaked my interest Deathbonnet Sprout Â Flip and Heirloom Mirror Â Flip i think these two could make a really fun deck to play, here is the deck list(not finished and is going to change a lot) deck: https://tappedout.net/mtg-decks/jund-graveyard-deathbonnet-heirloom-mirror/ heirloom helps bonnet transform and could be a way to put cards into the graveyard, and bonnet is one mana 1/1 that turns into a 4/4. right now i want a shell where they could work together, recomend me any cards,from any format or eracuz i want to make the most optimized list i can, as long as they aren't very expensive. i want things i could discard with heirloom and things that take advantage of the graveyard, but i would also want to have some type reanimation in case all my good cards end up in a graveyard and have no way of getting them back.

A cool creature i saw was Orcus, Prince of Undeath that maybe would work as an end game play.

Thank you a lot

Aye, obviously Goldspan Dragon would be a very good top-end card for this kind of deck, but he's already in your maybe board so that suggestion would be kinda redundant (I'm still tilted by how expensive he is, but I get it).

I know you put Xorn in the sidedeck, but I think inserting him into the main deck and maybe taking out two Orcus, Prince of Undeath would actually be very helpful. You kinda wanna save Ornis as a late-game card anyway, so having 3 of him might be a bit overkill.

As for new suggestions, Im actually not entirely sure. Lightfoot Rogue gives you another cheap dice-rolling body, but the actual effects that result from your rolls are kinda underwhelming.

Hoarding Ogre is literally just a poor man's Goldspan Dragon that also does dice shenanigans at the risk of giving you less treasure.

Feywild Trickster actually has a great dice payoff, but since you're trying to cram in both dice and treasure in the deck, Im not entirely sure how often you'll be able to trigger her effect.

Chaos Channeler might look good, but Im not sure if you want a lot of 4 drops. Same principle with Storm-Kiln Artist, but also you would have to run more instants and sorceries to continuously produce more treasure. He's at least a dwarf so he'll synergize a little bit with Magda.

Plundering Barbarian is a little underpowered, but at least he's somewhat flexible due to his modular ability. He's yet another Dwarf that can trigger Magda as well.

Maybe you can lean into Magda's tribal ability to get you more treasure?

Ach, I apologize if these suggestions are underwhelming. Im having trouble coming up with reasonable suggestions. They all seem to have something holding them back ya know?