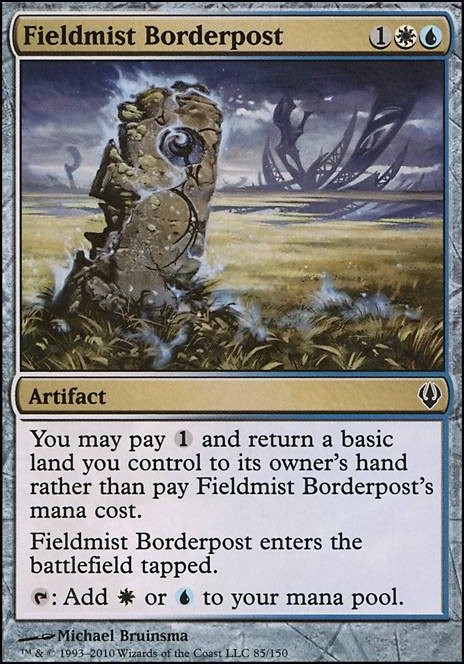 You may pay {{1}} and return a basic land you control to its owner's hand rather than pay Fieldmist Borderpost's mana cost.

Let's Work on Your Balance!
by SandwichMan007

I suggest replacing Taigam's Strike with Distortion Strike . I think that for three mana less its worth just being +1/+0 instead of +2/+0.

Also, maybe instead of Evolving Wilds you could put Fieldmist Borderpost to trigger more prowess for free.

Finally, i like instants with no cost like Gush or Ramosian Rally to trigger prowess. It always throws the opponent off and keeps them worried even if you are tapped out :P

ramos is my stepdad

Exotic Orchard is always amazing in a 5-color deck. Sungrass Prairie might be useful since you have a lot of cards with GW in the cost. Murmuring Bosk is a fetchable Forest. As you have so many lands with land types, it might be wise to run Nature's Lore, Farseek and Skyshroud Claim instead of some signets. You might also consider Fieldmist Borderpost cycle, since they synergize with Ramos despite being slower. Commander's Sphere replaces itself in the lategame.

Hi man, I've seen your post on reddit and, with that budget, I think you need some rocks like Sol Ring, Azorius Signet Fellwar Stone Chromatic Lantern Fieldmist Borderpost instead of 5 lands. Still for the land part Land Tax will give you an easy land drod and Compulsion instead of Gift of Estates and Careful Consideration. I dont know if you avoided it intentionally but with Strionic Resonator you can combo off with Brago, King Eternal. Still a good list and +1 for me!

First of all if your ramping into door to nothingness you either want duel lands or tri lands and Mana rocks such as the various border posts or signets. Secondly you want a secondary win condition, and my advice is (staying in colourless theme) Darksteel Reactor. Although slow, many people will try to work out ways to eliminate it because it appears to be a threat. Finally you need more blockers to help protect your plan. Keeping theme, Etched Champion and Myr Servitor fit nicely here.