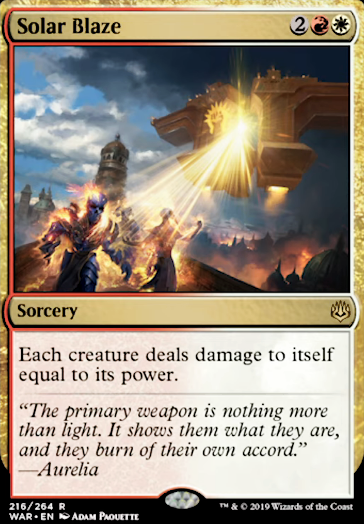 Each creature deals damage to itself equal to its power.

Someone Stole Your Sweet Roll
by CaliSurferBoy 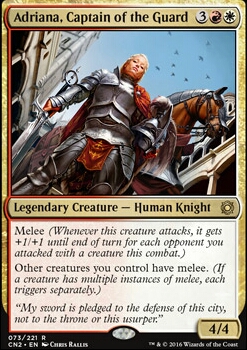 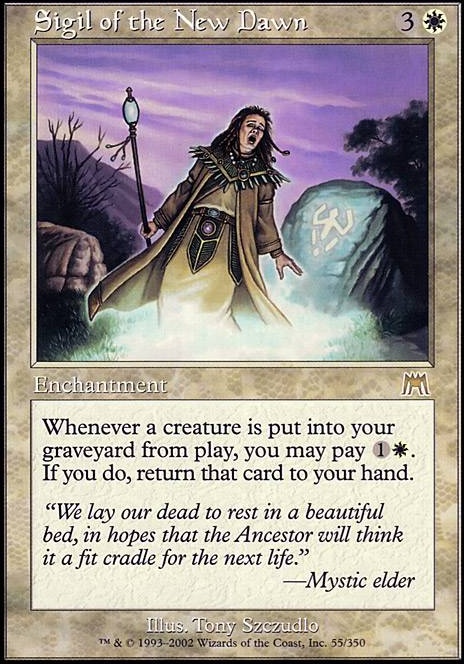 Command the Park
by Pyro957

An Arrow to the Heel

I really like your concept here, and I'll definitely have to steal some of your ideas ;)

Just as me, you've included Tajic and Loyal unicorn. I also added The Wanderer for this damage prevention package for redundancy.

I'm not sure about Solar Blaze . If I understand the interaction between this and Haktos correctly, he would actually get killed here at least when he's set on CMC 4, as the source dealing damage to him would be himself.

Glad to hear youâre using Domri, Anarch of Bolas! I certainly feel 4 is a great amount due to his versatility. Often heâll get removed, destroyed as Iâm sure youâve found out. Iâd definitely keep 4 in.

I think you definitely could forgo Sunwing and replace with all Shifting Ceratops. There is a good amount of removal now with those 4 Domri and having the reach on Shifting should feel good.

You certainly could just keep it Gruul, might as well keep it that way for now. Iâd recommend some number of Embercleave as thatâs worked out quite well. If you did go White at some point Iâd try Solar Blaze though with lots of removal from other cards itâs not a must. Iâve just loved it VS stuff like Mono G and various Grull.

Iâd try Flame Sweep , possibly even in the main. Itâs worked great at clearing out the little guys and/or bringing down an opposing creatures toughness in range to be killed with one of mine. A nice little combat trick after blockers are declared, before passing to damage.

Other than that things should really start to improve with Domri Anarch. Any more thoughts Iâm happy keep discussing!

I love and play Dinoâs as well!

Some things I can see right away to consider are Ranging Raptors but no basic lands?

10 Fetchlands but only 8 possible targets.

Iâve found using around 8-10 Basics works well with Ranging for some great stable ramp via pings from Marauding or other spells.

Iâd try out Solar Blaze , itâs worked wonders due to a pretty big number of my guys being bottom heavy.

I was originally going to say yes, but that guildmage saved a lot of damage in two games by tapping down a big attacker a lot, and enabling Nahiri, Storm of Stone . I might drop the Boros Challenger since most of the creatures in your deck already have two power, or at most you will get one trigger.

Also, Legion Warboss generally doesn't add much value in my experience. The one goblin it makes often gets chump blocked, then he gets removed. I would say overall: -3 Legion Warboss and -3 Boros Challenger for +1 Tajic and Aurelia, and +4 Hero of Precinct One .

I feel Like Solar Blaze should be a 3-of in Side Board, not a 1-of in main. Given your creature costs, do you often find it is killing them? Deafening Clarion might get you further, giving you a lot of lifelink and a small scale boardwipe if needed. I might do -1 Solar Blaze and -1 Response / Resurgence for +2 Deafening Clarion in mainboard to keep up with some options.

Lastly, this deck needs some deck filtering/card draw. I recommend 3x Revitalize in the Sideboard against Aggro to keep ahead. I also recommend 2x Light Up the Stage . I would remove 1x Mountain and 1x Plain, and go 22 Lands. This deck tops out at 4, so you don't need a lot of mana late game. If that makes it harder to use the Guildmages, then maybe you drop them for some similar prison effect that is less mana intensive, like Prison Realm (which I like for the Scry). As you develop your rares, I would drop the Nahiri's for Experimental Frenzy or Chandra, Fire Artisan . Again, no more running out of gas.

Note on Sideboarding: I know sideboarding can be a pain, but with White, you have the best sideboard color in the game, and learning to use it can be very important. If you just do 1-ofs in Arena, I guess Nvm. If not, get some Disenchant and Revitalize in the sideboard, along with Lava Coil to start.

Want to play a game?

I ran a couple goldfishing playtests of your deck (i.e. running it by itself with no opponent trying to hinder you) to demonstrate how quickly you could expect to cast one of your Eldrazi. The results were on turns: 9 (issues with lands entering tapped due to the lack of basic land types slowing down playing creature cards); 18 (hit sufficient mana on turn 11, but didn't draw into an Eldrazi); turn 8 (no plays until turn 4); turn 9.

That's far too slow for Modern, particularly given your lack of useful interaction.

In the interest of helping you as a deckbuilder, here is some generic advice:

This site has some rather helpful analytical tools, such as a handy dandy little chart showing how much your spells cost. This shows your highest concentration of spells are cost 4 mana, which is a high place for your curve to be centered.

Since your last iteration of this deck, you have added more removal, but most of the removal is fairly lackluster. Here are cards that don't work for you:

The one strong piece of removal you have is Assassin's Trophy - it's a strong card that hits any permanent you might need to kill. Other strong piece of removal in Modern include Path to Exile , Lightning Bolt , Fatal Push , and Dismember . When choosing your removal package, you want to (a) focus removing creatures and (b) focus on cards with a low converted mana cost.

For ramp, you don't want to focus on having a bunch of lands and ways to cheat them into play. Instead, consider ramp creatures like Llanowar Elves . Simian Spirit Guide is also a pretty strong answer if you are in red, as it gives a free influx of mana.

Normally Modern decks have 24 or fewer lands, depending on the curve of your deck. 30 is far too many.

Remember that, just as important as ramping into the spells you need is the ability to actually cast spells when you need them. To that end, a four colour deck is pretty hard to pull off without a bunch of expensive fetch and shock lands. Seeing as you do not want to run Tron and want to stick to other methods of ramp, your best option is going to be a two-colour deck with Green for ramp and another colour (white would be my choice) for removal.

Hopefully some of that helps show some of the issues you're having, and provides some direction on how you can make some improvements.