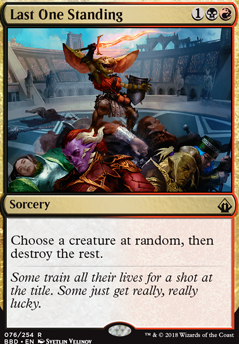 Choose a creature at random, then destroy the rest.

Last One Standing occurrence in decks from the last year 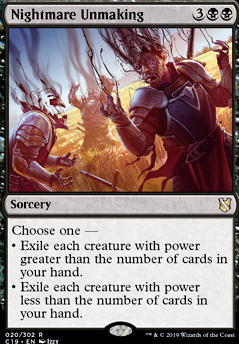 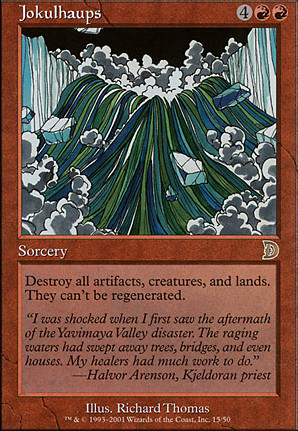 Mogis Likes It Rough
by SatisfactionDay

griffstick on i nead help with a ...

Well board wipes are gonna work great. Also free value will work great. So for board wipes as many as you can get and even dumb ones like Last One Standing just so you can stay low curve. And free value. Cards like Sunbird's Invocation, Lurking Predators, and Mind's Dilation. Stick to this route and you'll be fine

Spark Double - Copies Marchesa for double Dethrone and this copy enters with a counter immediately protecting itself.

Sage of Fables - Card draw, immediately protects Marchesa, and it doubles as a combo piece with Ashnod's Altar and Flayer of the Hatebound.

Midnight Reaper - Grim Haruspex with life loss is a plus in Marchesa.

Sadistic Hypnotist - See above but on a free sac outlet.

Ramp:- Other than Obelisk (and Lantern if you need it) I'd drop your cost mana rocks. They don't ramp you into a drop commander whereas drop rocks will net you a turn 3 Marchesa.

Last One Standing is an excellent budget option for 3 mana.

Sac Outlets: Besides the ones I listed above.

Daedalus19876 I totally agree. Maybe i've just had some rough experiences with Last One Standing in the past, but you bring up a valid point. Regarding the board wipe, I feel you should give Damnation a shot, as hopefully you hit some early ramp, which makes it a whole lot more viable.

It shouldn't hurt to essentially have a higher costed lili that has a bonkers ult that will ate the very least eat a Utter End or another removal spell which makes way for Kroxa.

I played this deck yesterday irl with a proxy Kroxa, and I slotted in angrath, and i didn't feel too underwhelmed. He got some work done, and I would certainly try to find a slot for him. If you don't want to cut Last One Standing maybe consider cutting Key to the City .

I know it's a solid card, but being two mana down on your untap without that much ramp doesn't seem very ideal, but I guess getting to discard and draw a additional card seems deece.

Another card to consider would be Rotting Regisaur . Lets you discard cards to Kroxa's escape, plus a 7/6 body as soon as turn 2 can be huge in battering down player's life totals for Kroxa to make short work of the rest of the table.

Kinda off topic, but what do you think of Dragonlord Dromoka stax/hatebears/pillowfort?

Whirlwind_2100: In all seriousness, I should test Angrath. But I feel like Liliana, Heretical Healer  Flip might be better in that slot -- I can play her, drop Kroxa and let him self-sacrifice, then flip her and get a token. Her +2 is pretty great, and both of her minus abilities are brutal.

I really don't want to pay 9 mana for a board wipe, though. (And if I did, Decree of Pain is my go-to.) Last One Standing isn't really meant to deal with one huge voltron threat, it's meant to be a very low-cmc answer to a large number of distinct mid-sized threats.

This is really interesting! Gonna keep it in mind when I start building my own Kroxa deck. I love that you used Last One Standing , it's sort of a pet card of mine and I think should see more play.

It's a strange deck, so it's hard to form a proper opinion until seeing it played, but I definitely think it looks cool. Makes me excited to get my own built!

(Also, I'm now gonna have to picture Kroxa shouting "feed me" in Audrey II's voice every time I cast him haha)

Marchesa - No Rest For The Wicked

Nice start. I do have a few suggestions to help you lower your avg. cmc though and I'll try to break it down by category and suggest a cut.

Draw: Midnight Reaper , Yawgmoth, Thran Physician , and Skullclamp for Butcher of Malakir (Grave Pact if your mana can handle it but Butcher is overcosted and susceptible to more removal), Bedevil (versatile but single use and not abuseable here), and Necropolis Regent (Really good at what it does but there's better finishers for Marchesa).

Win Cons: Gray Merchant of Asphodel and Kokusho, the Evening Star (both very abuseable with Metallic Mimic to ignore the Throne and win outside of combat).

Discard: Sadistic Hypnotist and Oona's Blackguard (discard helps seal up games tighter than a dolphin's butthole) for Vilis (Marchesa does better with cheap aggro) and Underworld Connections (You'll have better results out of resource denial than a single use per turn draw).

Feel free to check out my list for inspiration, it's one of the top rated Marchesa lists on this site. Upvotes on any of my decks are appreciated. Every Masochist Needs a Marchesa To Love Them