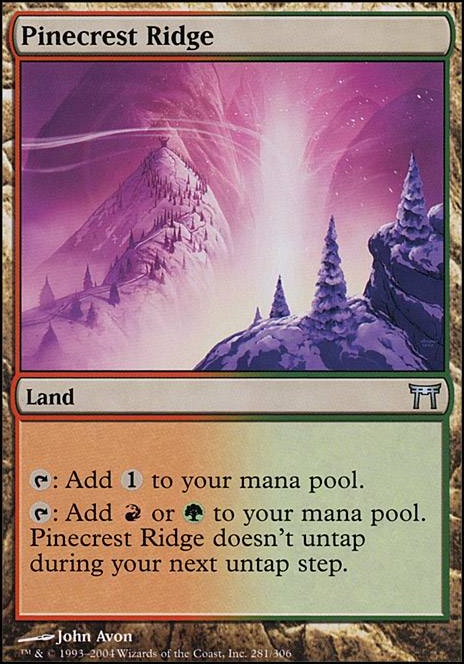 Tap: Add (Red) or (Green) to your mana pool. Pinecrest Ridge doesn't untap during your next untap step.

I have added some more lands, a Llanowar Elves and an Elvish Mystic . I have also added Garruk's Packleader for some card draw.

triproberts12 Thanks, I have been been reading through the comments on that deck and was wondering if putting lands like Stone Quarry , Pinecrest Ridge and Selesnya Sanctuary are better or if I should go with signets.

I have also been looking through some cards i already have that might fit in the deck and put them in the maybeboard, I am interested in what people think to these cards in the deck.

My go-to budget Tron list I recommend to help grind FNMs is:

This gives several utility lands, while also having a good balance of colored mana. The important thing to remember: you absolutely cannot have lands come into play tapped and you will lose games to decks like Burn and Death's Shadow if you have to pay life. The obvious choice is Grove of the Burnwillows for this very reason. However, that obviously will eat your entire budget.

Pinecrest Ridge is probably the best replacement. Not only does it have the option to just tap for colorless and come into play untapped, you can get the or you need to search for Tron pieces or cast Pyroclasm.

This is pretty standard for a Tron list, the exception being Talisman of Impulse. While you don't want to be paying the life against faster decks, having the ability to tap for colored mana and still get Tron on turn 3 is more helpful when you're on a budget. It means you can play multiple World Breakers, add Inferno Titans, or use whatever budget options you have lying around when some of the more expensive fat cards (like Karn Liberated or Kozilek, Butcher of Truth) aren't available. That way, you're not relying a whole lot on cards like Myr Battlesphere or Steel Hellkite.

You need boardwipes. Pyroclasm is especially important because you will lose to a turn one Slippery Bogle is you do not kill it immediately. They will untap on their turn two and toss an umbra on it. By the time you can use another piece of removal, you'll be so low on life that they can simply play another one or get you with Dryad Arbor. The same is true against turn one Glistener Elf. They will use something like Apostle's Blessing to deal with whatever you have once they untap.

You can skip on red and go straight mono-green, but then you just have to accept that you lose to Infect, Bogles, and Burn. If these aren't in your meta, replace Talisman of Impulse with Mind Stone or Relic of Progenitus and the lands with basic Forests and a 2nd. Ghost Quarter.

The All Is Dust is probably the only non-budget card I'd recommend you have because of how much 3+ color decks get BTFO'd on turn three when you slam it. If it's still out of your budget, replace it with a Platinum Angel.

Basically, choose a combination of the following that fits into your budget (I put them in order of importance):

Based on what you've posted, I'd recommend something like:

2x Wurmcoil Engine
2x Sundering Titan (you can power this out on turn 3 via Talisman of Impulse and laugh at some Jund player's $2,000 mana base as they concede)
1x Worldbreaker
4x Relic of Progenitus
1x Spatial Contortion

All that's left is your sideboard. Based on the above, I'd go with:

You are so very welcome, chiri! It's not as well optimized as I'd like and it's quite out of date, but I hope that as you play it/tweak it that it will become even better and a good Penny Dreadful companion for ya.

As for changes while looking back at this list that I might try testing, I'd consider replacing the Rugged Highlands with something like Pinecrest Ridge. Even though slow lands like that could be painful, having the guaranteed fixing turn one for Village Messenger  Flip would be nice since its a playset possibly. This deck is kind of mid-rangey and I'm not sure if Village Messenger  Flip furthers that goal appropriately. For a mid-range deck, maybe a turn one mana dork such as Fyndhorn Elves would work, even if it's not a werewolf.

Maybe look at other lists and build the curve from there. I'd take another look at the curve of the deck, since it's a bit too chock full of 3 drop creatures. Improving the consistency of this deck would be a positive thing, and the best place to start improving that is the mana curve. Even though I'm not sure if the current meta leans towards aggressive decks or ones that fight the long game, the cool thing about werewolves is that it has the pieces to be either aggressive or more mid-range.

I'd consider adding some more Moonmists in the sideboard (and honestly just rework the sideboard cards/amount of each effect depending on the current meta). Speaking of mana fixing and Moonmist, to further smooth the mana requirements you could consider putting in Moonmist as opposed to Spirit of the Hunt. Sure you don't get a 3/3 flash body (which I found to be not as awesome as it sounds since it wasn't terribly consistent), but it's guaranteed protection from combat damage as opposed to +0/+3 and guaranteed transformation, which I think may be more useful more of the time and more frequently attainable, as it's 2 CMC instead of 3, and just one green mana symbol instead of two.

This deck is a little messy, so it's hard to say what to take out and what to increase in numbers.

At first, maybe you want to take a look at a pretty interesting (though Bant coloured) landfall deck: Moonfall

You definitely can drop the following: Synod Sanctum, Temple Bell, Pinecrest Ridge, Natural Connection, Grazing Gladehart, Solemn Simulacrum, Retreat to Kazandu and Zendikar Incarnate. This makes fourteen cards less. Then you should also drop some basics to get to somewhat around 15 of these. With the rest of your lands, you'll have 24. That's enough. We now have shrinked your deck by 33 cards and are at 63 cards if I counted properly.

From here on, I'd drop the two Blighted Woodlands and the silvan primordial. This would put the deck at sixty cards with an ok amount of 22 lands. Sounds a lot better. And now, you could play some games and start tweeking the numbers of your leftover cards.

You're going to need some color fixing.