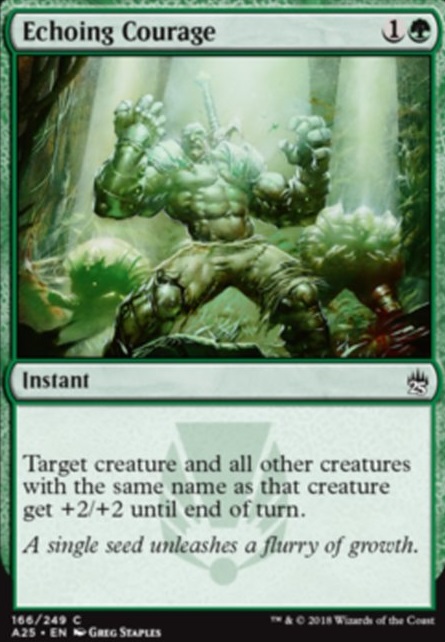 Target creature and all other creatures with the same name as that creature get +2/+2 until end of turn.

Ready The Legion!
by The_Stomping_Grounds

Echoing Courage and Might of the Masses might be good for this. Sundering Growth for the sideboard. Maybe Druid's Deliverance or Luminescent Rain ?

The modern ways of fungi farming

Sorry, I got one more card to bother you with. It took me forever to remember the name but Echoing Courage and tokens go wonderfully together :)

I have a number of concerns about this deck. Please read in full. I'm not stating anything I wouldn't follow myself. I really like your deck idea. In fact, I've loved land creature manipulation for a long time - Rude Awakening is one of my favorite cards.

1) As your creatures are weak by themselves, I don't see a win condition outside of Sylvan Awakening, other than Demon of Catastrophes. And if he's dealt with, you're in trouble. Some Mid-Range power creatures, like Josu Vess, Lich Knight could help a lot here. Josu can even end the game when kicked (and help get value out of Cabal Stronghold ). I like Liliana's Reaver, but it is not legal in Standard.

2) Sylvan Awakening gives you a field full of, well...2/2s. Even if you have 10 of them, not only do you have one turn to win the game, but certainly your opponent will either be able to block 2/2s no problem, or even counter the spell all together, leaving you in a bad spot. If they have a creature that can block multiple creatures, or has lifelink, that's even worse for you. You might benefit from a way to further pump each land up after becoming creatures. Echoing Courage is what I would advise, but if you're playing Standard, I don't know what to suggest here. Perhaps a global boost with trample.

3) Without a mono-black deck, I fear you won't get the full use out of Cabal Stronghold, and will end up with a colorless producing machine, instead of the extra black mana you're hoping for. Not only that, but the land is really only useful for high cost cards, like huge demons that are hard to cast otherwise, like Reiver Demon, or for cards with X in the cost, like Consume Spirit, or Torment of Hailfire.

4) Since you're depending on win conditions a bit later on, having defensive spells could be beneficial. A Standard equivalent of Doom Blade or Grasp of Darkness would be nice. Cast Down is one of my favorites.

Again, cool idea, but it's really hard to make work. I've been looking into mono black efficiency myself. Maybe something like Liliana's Reaver could help with mid-range power, or Glint-Sleeve Siphoner to help with card draw early on.

Yeah I already have 3 sign cremate might be better though because its a one drop thx for this suggestion i didnt knew this card before.

Ive been thinking about blessing/groths for a while and maybe even splashing G for Echoing Courage and some copies of Spidersilk Armor and Lead the Stampede.

Dark rituaal is just card disadvantage and i do t think playing more rats faster is worth that. Just makes the deck even more voulnerable to boardclears

Rzepkanut on Rats in EDH: How would â¦

Gattison: I've seen a saproling list these days with Echoing Courage it's on colors and quite a finisher for 2 mana.