This spell casts less to cast for each artifact you control.

When Emry, Lurker of the Loch enters the battlefield, put the top four cards of your library into your graveyard.

: Choose target artifact card in your graveyard. You may cast that card this turn. (You still pay tis costs. Timing rules still apply.)

Emry, Lurker of the Loch - Artifact Combo
by opiegohard095 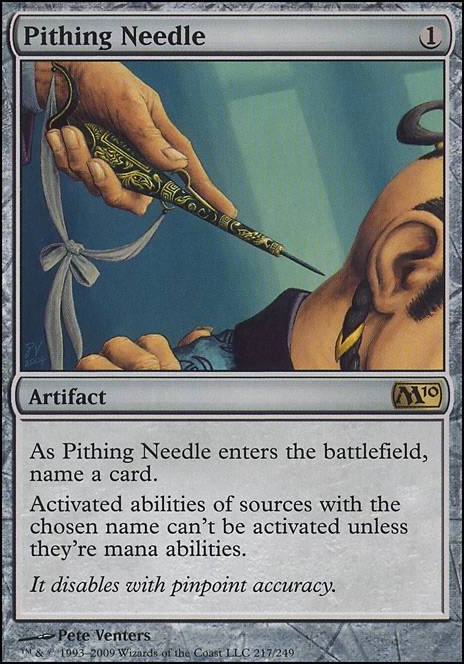 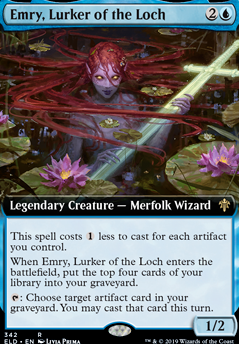 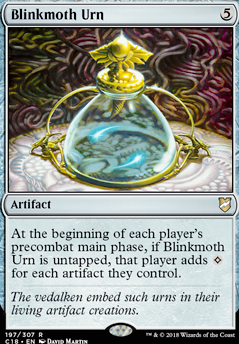 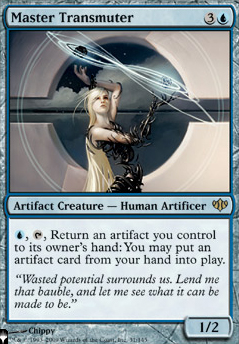 Emry, Lurker of the Loch Discussion

With all required cards on the battlefield; tap to sacrifice Mishra's Bauble using it's activated ability, once Bauble enters the graveyard, tap Emry, Lurker of the Loch in order to recast Buable from the graveyard, one Buable enters the battlefield this with trigger Jeskai Ascendancy's loot and replacements effects, repeat ad infinitum or until satisfied with the number of cards drawn.

Yeah, late for you cutting ascendency. But my tightest Jeskai Ascendancy loops were things like Emry, Lurker of the Loch and Tormod's Crypt. And without Emry was still untapping enough man lands for unlimited colorless mana and limited but usable access to colored to cast my other mutate cards to keep the chain going. One of the dumb things I was trying in the non-ascendency version and looks like it might be its own form of stupid is just Howl of the Horde. Just in general use, Vadrok is so good at trading dumb mutates in hand for almost anything in the graveyard. But is easily guilty of repetitive play just because a single spell can get cast 5-6 times in a game even without other shenanigans like both our decks do.

For those keeping track. Oh wow does Jeskai Ascendancy change the tier of these decks. You will want to have the right playgroup before you go off with an Ascendency powered turn. At least on M:TGO a group needs to be all in to accept a turn where you take 10 minutes of getting 3 spells for one cast, and managing 12 triggers as a result. And you're just iterating off these spells to keep casting more spells. Effective, but a real time burner of a kill turn. At which point I decided that for my playgroup... no Ascendency... but also I built a version that doubled down on being competitive. Like Vadrok naturally likes Cephalid Illusionist. For compactness, that line of play is Illusionist, Thassa's Oracle and Shaman en-Kor. And then the Blinkmoth lands and a couple other manlands as they work with Fatestitcher and Emry, Lurker of the Loch