Whenever you cast a noncreature spell, draw a card. 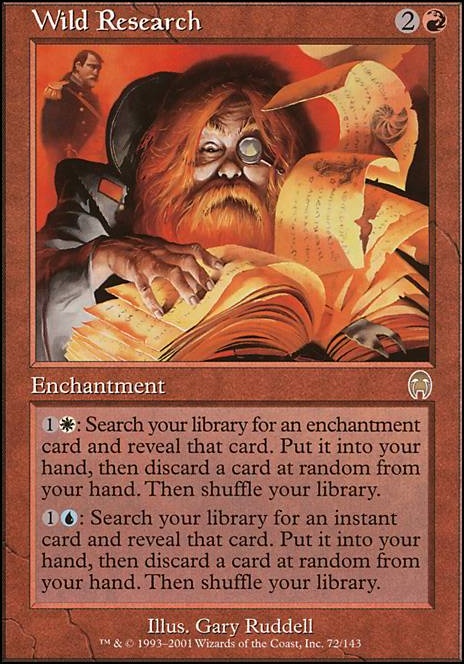 Kykar, the Oncoming Storm
by xander11

As for the others:
- Copy Enchantment I've run it and it's really good but decided to replace it for Mirrormade but MAYBE i'd expand max to two cards that copy enchantments - the effect is definitely powerful combined with the other enchatments
- Cast Out very good flash Oblivion Ring now i'm looking for a creak to include it
- Estrid's Invocation good card, have it in my other enchantment focused EDH, but does not really make the cut. The versatility of reentering the battlefield as something else you have does not offset the ability to target your donated oblivion ring if the timing asks for it IMO. Also can't abuse any enter the battlefield effects.
- Thought Vessel good stone but I'm not sure I can slot it in just for the no maximum handsize it brings

Again, thanks for the suggestions, this is just my thought process behind it :D

Hey KongMing thanks for the suggestions but card draw isn't usually an issue that I run into enough to justify Whirlwind of Thought . I can see Narset of the Ancient Way having some use and may try her out in a variant, along with Shark Typhoon though they would probably fit better in the 80 card yorion version of this deck. I have really tried to streamline this version into boardwipes, exile effects, and protection for the shrines. Thanks again for the feedback.

-Ugin Update- I can't believe I hadn't thought about it but Sorcerous Spyglass is now this decks answer to Ugin.

How about Narset of the Ancient Way ? Also, Whirlwind of Thought gives you solid card replacement. They're both a little color restrictive, but effective and share the Shrine theme.

I have and it's a very fun deck. I really love making decks that overflow with synergy and theme. It's more fun to me than every deck having 50% of the same cards. That's why there's no cards like Preordain , Ponder , Swords to Plowshares , Force of Will , etc.

All the removal in this deck also has the ability to target my own creatures - Selesnya Charm , Dromoka's Command , etc. So this kind of build probably won't be best if you have a very competitive playgroup, although it is very explosive so you could maybe steal a game or two. Several of the enchantments when combined on the battlefield give the deck an almost combo-esque feel (eg, Underworld Breach + Song of Creation / Whirlwind of Thought ).

It could easily be honed with 1 mana cantrips and a couple counters if that's what you're looking for.

Kenrith is a power house just by himself. I use Biomancer's Familiar and Zirda, the Dawnwaker to reduce the cost of those abilities. It gets out of hand very quickly. I don't play the deck often because I pretty much always win. Mine just focuses on cycling creatures and pulling them back out of the graveyard with Kenrith. And somehow, I've never seen Whirlwind of Thought . I know I have some decks that could use it!

not sure how I feel about Phyrexian Triniform for 9 mana its a bit much. I have tried Thran Temporal Gateway and Quicksilver Amulet I think your curve is too low to make good use out of them as well. I think you may be light on the card draw have you considered cards like Vedalken Archmage, Whirlwind of Thought, Shimmer Dragon, Riddlesmith

Could this deck benefit from something like Trail of Evidence. I find myself running out of cards as the game goes on plus you hold up mana anyway for responses. I was looking for a Whirlwind of Thought-like effect in azorious colors and this was the closest I could find.